‘Objects of Study’: Art trove from Marcoses put on exhibit 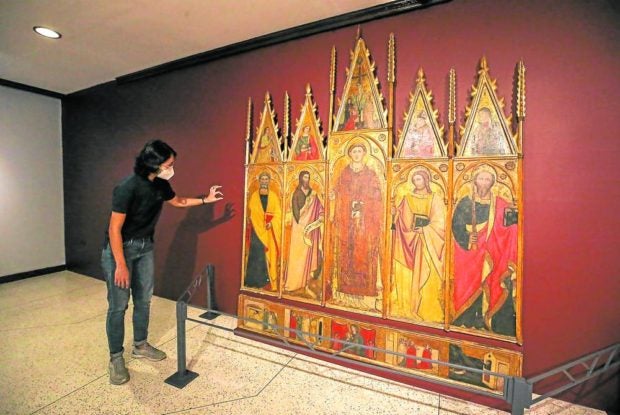 RARE LOOK | The Presidential Commission on Good Government and the Vargas Museum of the University of the Philippines Diliman have opened an exhibit of some of the artworks seized from the Marcos family after they fled Malacañang to give the public a rare look at part of their ill-gotten wealth. The courts say the wealth amassed by the late dictator and his wife during his 20-year rule was way beyond their combined legal income. (Photo by LYN RILLON / Philippine Daily Inquirer)

MANILA, Philippines – In an unprecedented move, the government agency mandated to recover the ill-gotten wealth of the Marcoses and their associates has opened an exhibit of some artworks sequestered from the family of the late ousted dictator Ferdinand Marcos.

The Presidential Commission on Good Government (PCGG) temporarily lent selected artworks originating from Italy, the former Soviet Union, and the former Yugoslavia, which are part of the art pieces traced to the Marcos family, to the Vargas Museum of the University of the Philippines (UP) Diliman.

The exhibit, which opened on July 12, includes paintings on canvas, glass, and wood. Others were those crafted in lacquer, the medium of egg tempera and copper and the ornament of gold leaf.

At the central part of the “Objects of Study” exhibit are 36 lacquerware from 207 plates, lipstick cases and jewelry boxes that had been seized by the PCGG over the years since it was established in 1986 after the Edsa People Power Revolution that drove the Marcoses out of Malacañang. 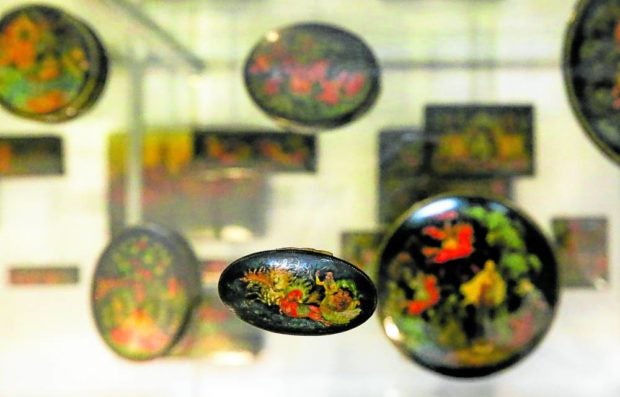 ‘To study is to inquire’

These items were handpainted with miniature scenes of legends, old village life, fairy tales and Russian landscapes—exuding the “excess, identity and prestige” of the dictator’s “illegal” possessions.

“They are objects that are the subject of study. To study is to inquire, research, investigate with the view of exploring the unknown, revisiting the familiar, grasping the tricky, even inviting the failure to understand,” the museum explained in a note on one of its walls.

“It is a chance to probe the preconceived, challenge the widely-held, and finally render the objects sensible: thoughtfully felt and imagined to be signifying something else,” it said.

After the 1986 revolt, the PCGG found evidence that Marcos and his wife, Imelda, had acquired artworks of European masters like Van Gogh, Picasso, and Monet that cost millions of dollars, way beyond their legal income.

“Among those sequestered were found at the Metropolitan Museum of Manila — conceived by Imelda in 1976 as a site to display non-Philippine art which would ‘increase the Filipino people’s awareness of the cultures of the world,’” the museum said.

“Since then, a number of paintings, including the ones by Botticelli, Raphael, and Titian, had been disposed of by the PCGG through auction, the proceeds going toward agrarian reform. But some pieces remained,” it added. 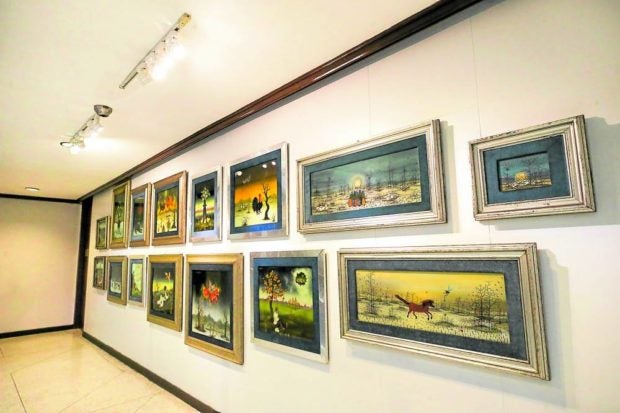 The “objects” of the exhibit are artworks made for worship or commissioned by patrons, some created by well-known artists and others “supposedly by peasants.”

The most notable one, placed opposite the lacquerware, is the circa 1330 “Altar piece of 5 saints” by Lippo Memmi, an Italian painter from Siena.

Memmi’s work consists of two separate parts: a bottom predella that depicts some narratives from the Bible and an intersection with two immovable wings on either side where the five saints are painted.

The left and right wings of the museum feature “Yugoslavian Naif paintings,” which depict “ideals of social critique and realism.”

According to the museum’s note, the first generation of Hlebine school (or Yugoslav naive painters) encouraged departure from paintings that portrayed rural life and poverty.

The works of Franjo Klopotan and Duro Belosa showed visions of folklore, fantasy and surrealism but for some artists like Ivan Lackovic Croata, Mirko Horvat and Peter Grgec, still life images prevailed.

“The exhibition addresses the need to situate these cultural objects within a social context, to productively appreciate and to come to terms with the layers of difficulty presented by the PCGG Artworks Collection in its implication of a complex political history,” the museum said. 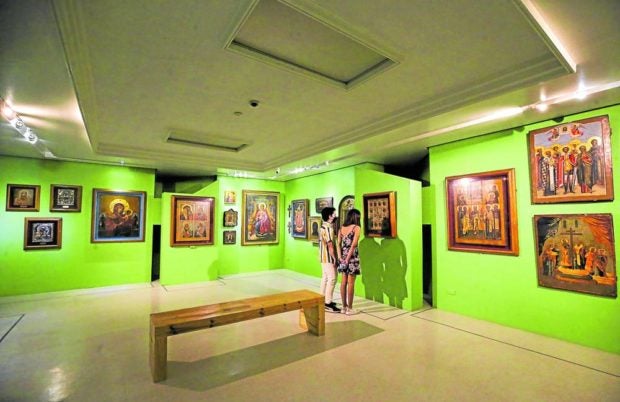 The museum noted that the artworks in the collection were still under litigation and the research on the sequestered property continued.

When it opened, the public was prohibited from taking pictures of the art pieces, but as of Saturday, photography and videos for “educational, research, publicity, press and catalogue purposes” have been allowed.

The PCGG has recovered 15 paintings worth more than P400 million while over 800 paintings here and abroad are still under litigation, according to previously published reports and documents. 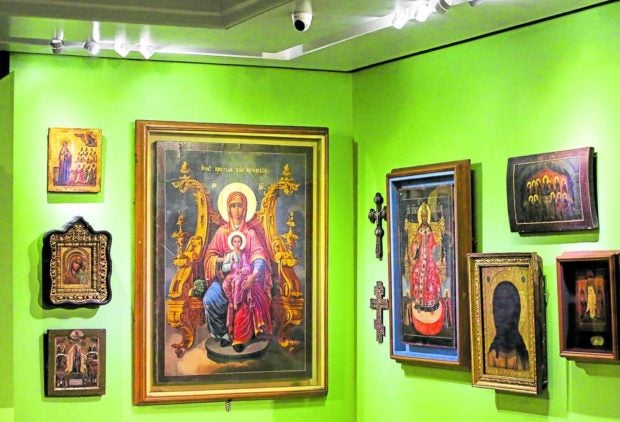 In 2019, the Sandiganbayan declared 896 pieces of art as ill-gotten and “unlawfully acquired,” and ordered the Marcoses to either surrender them or pinpoint their locations.

More than 100 art pieces, including works by Van Gogh, Picasso, Monet, Rembrandt and Michelangelo were reported as missing by the PCGG. It estimated that these missing paintings were worth about $300 million to $500 million in 2016.

Some of the paintings were found to have been sold in the black market, including Monet’s “Le Bassin aux Nymphéas” (Water Lily Pond) which was sold by Vilma Bautista, ex-aide to the former first lady, for $32 million to a London gallery in 2010. Bautista was later found guilty of scheming to sell the painting and tax fraud by a US court.

Some other paintings have been seen displayed in the residences of the Marcos family.

—WITH REPORTS FROM INQUIRER RESEARCH, BEA GARCIA AND AIRA BERNARDO