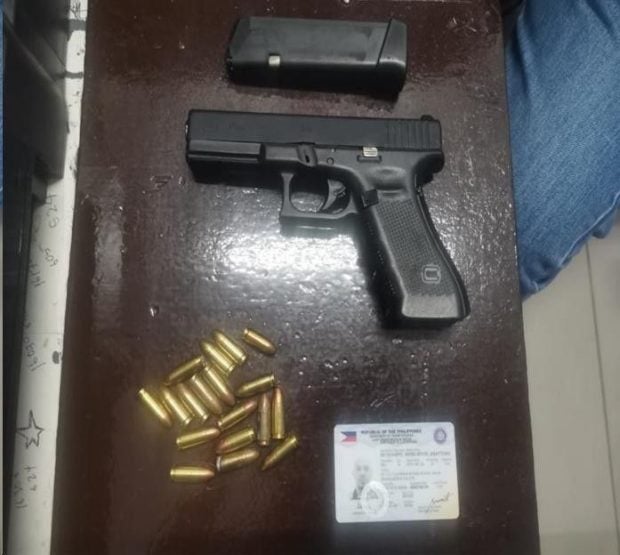 A traffic violator was found in possession of a 9mm caliber Glock 17 along with magazines and 18 live bullets. (Photo by NCRPO)

Cordova and Yumul, both part of MPD’s Tactical Motorcycle Rider Unit, confronted the motorist, who was said to be from Dasmariñas, Cavite. But during the apprehension, police — supposedly in plain view — saw a 9mm caliber Glock 17 inside the suspect’s Subaru sedan, along with magazines and 18 live bullets inside.

The police didn’t take the bribe.

Aside from the firearm, magazine and bullets, the vehicle and five bundles of P1,000 were also seized from the suspect.

According to NCRPO, further investigation revealed that De Ocampo was previously charged for violating Republic Act No. 10591 (Comprehensive Law on Firearms and Ammunition), R.A. No. 10883 (The New Anti-Carnapping Act of 2016), and R.A. No. 9165 (Comprehensive Drugs Act).

He was said to be involved in a kidnap-for-ransom case.

Police said that the suspect will face charges for violating Article 5, Section 48 (Reckless Driving – Entering One Way Street) and Section 56 (Failure to Show OR /CR) of R.A. No. 4136 or the Land Transportation and Traffic Code.

For the seized firearm and the attempted bribery, the suspect will be charged with violating R.A. 10591 (Illegal Possession of Firearm and Ammunition) and Article 212 of the Revised Penal Code (Corruption of Public Officials).

Natividad commended the two officers for having discipline, resisting temptation and maintaining their dignity. He also hopes it becomes a lesson for other officers who may face similar circumstances.

(I am really happy with our officers at the NCRPO because they work efficiently, orderly, and exhibit self-discipline. They did not sacrifice their service and dignity for the sake of money. I hope this becomes an example for all cops within NCRPO.)