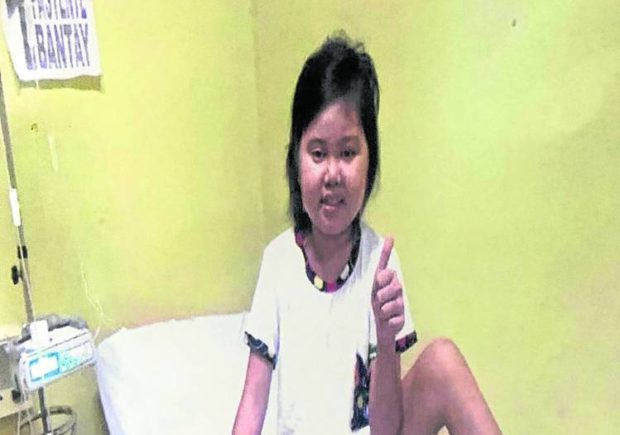 Doctors may have given up on her daughter but for Jocelyn Monsanto, the fight is far from over.

“The doctors told me that they cannot do anything more and while I said that I’ve accepted her fate, I still asked them: What can we do for her to live longer?” Monsanto said.

After being diagnosed with acute lymphoblastic leukemia in 2014, her 14-year-old daughter, Christen Kaye, went through two rounds of chemotherapy.

But last year, she suffered a relapse as tests showed that the cancer had returned and spread to her brain, affecting her eyesight.

According to Monsanto, Christen is now undergoing oral chemotherapy or palliative care—specialized medical care intended to relieve her pain and other symptoms.

“I’m really just praying that she will have a longer life,” Monsanto said, adding that aside from weekly follow-up checkups, doctors were monitoring her daughter for convulsions or seizures.

The family spends around P28,000 to P30,000 every month for Christen’s treatment, although with the meager P400 to P500 her father earns daily as a construction worker, they can hardly make ends meet.

Monsanto said they had been buried in debt since her daughter relapsed in 2021 when strict lockdowns were imposed because of the pandemic, forcing them to sell their belongings just to get by.

“We don’t even have a television,” she added.

Christen likes to do TikTok videos to pass the time but sometimes, the only cell phone owned by the family needs to be pawned for additional cash.

“We’re trying to endure this poor life but we’re really having a hard time even providing for our daily meals,” Monsanto said.

To help pay for Christen’s oral chemotherapy, donations can be deposited in Monsanto’s BPI account (account name is Jocelyn Ayuda, her maiden name, with account no. 6556505746). Monsanto can be contacted at 0907-0362969.