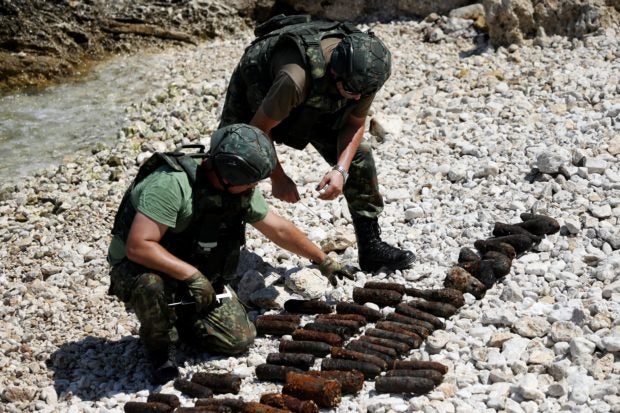 Albanian divers measure retrieved ammunitions during a joint operation with French divers from the minelaying cruiser Pluton, to clean the seabed of the Adriatic Sea from World War II ammunitions in the bay of Vlora, southwestern Albania on July 7, 2022. AFP

VLORË, Albania — Under a cliff in Vlora bay, one of the most beautiful sites on the Albanian Riviera, a diver emerges from the water carrying an artillery shell which he carefully places on the pebbly beach.

Beneath the crystal-clear water of the Adriatic, shells and grenades dating back to World War II rust on the seabed, polluting the water and posing a deadly threat to life.

Aboard the “Pluton” diving support vessel, a group of some 10 French and Albanian de-mining divers are on a joint mission to find and remove the munitions — but nobody knows how many still remain.

In less than two hours, the divers collected an impressive 85 pieces of ammunition, which were likely deliberately thrown into the sea by occupying Italian troops over seven decades ago.

“It’s joint work with the Albanian navy, which knows the site better than we do,” Captain Aymeric Barazer de Lannurien, commander of the French contingent, told AFP.

Barazer de Lannurien said most of the shells found were artillery shells, lodged between rocks on the seabed.

‘One or two grenades’

“We found one or two grenades that were on the bottom between the rocks, easily accessible to the population (that) could be dangerous for swimmers,” he recalled of last year’s mission.

This time around, the team said they recovered mortars and shells with calibres ranging from 20 mm to 155 mm.

While there are no official estimates of the quantities of submerged munitions, experts estimate that at least 20 World War II wrecks are located near Albania’s Adriatic coast.

The teams are well-versed in handling the potentially lethal cast-offs, but an ambulance is parked nearby just in case.

Divers pass the explosive devices between them before carefully lining them up on the beach, reminders of past conflicts.

Albanian troops then collect the shells and destroy them at a military base in the capital Tirana.

The teams face not only the ever-present risk of detonation, but also choppy seas and scorching heat.

Albanian skipper Ilirian Kristo laughed off the danger before disappearing under the waves.

“Bomb-disposal diving is a profession, but above all it is a great passion,” the captain said.

With fewer humans to fear, flamingos flock to Albania lagoon