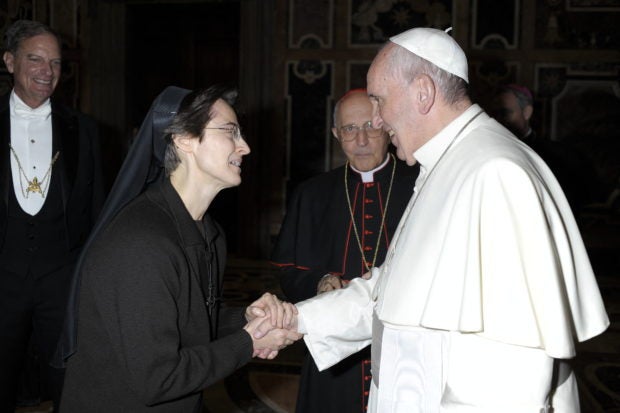 In this handout picture released on November 5, 2021 by Vatican Media shows Pope Francis (R) greets Franciscan sister Raffaella Petrini, which have been appointed on November 4, 2021 as new secretary general of the governorate, making her the first woman to ever hold the post. AFP

VATICAN CITY — Pope Francis named two nuns and a laywoman to the Vatican department that helps choose new bishops, the Holy See said Wednesday, the first time women have been allowed to serve on the body.

The appointment of the three women to the Dicastery for Bishops — nuns Raffaella Petrini and Yvonne Reungoat and lay woman Maria Lia Zervino — comes as Francis seeks to usher in more gender equality within the Church’s positions of government and responsibility.

The 85-year-old pope has repeatedly said that women should play greater roles within the Vatican’s hierarchy and has broken centuries of precedent to place women in some key spots previously held by men.

Last year, he issued a decree to allow women to serve as readers at liturgies, altar servers and distributors of communion — but stopped short of saying the change could one day open the door to female priests.

Petrini, a Franciscan nun from Italy, has since November served as the secretary general of the governorate of the Vatican, the first women to ever hold the post.

Reungoat, who is French, is the Mother General Emeritus of the Institute of the Daughters of Mary Help of Christians, a missionary congregation.

In another first, in 2019, Francis appointed Reungoat and another six women to the Congregation for the Institutes of Consecrated Life and the Societies of Apostolic Life, which is responsible for religious orders and congregations of both sexes.

Members had previously included only men — cardinals, bishops and priests.

Laywoman Zervino from Argentina is the president of the World Union of Catholic Women’s Organizations.

Members of the Dicastery for Bishops weigh in on potential candidates for bishops and provide recommendations for the pope.

In a statement, the Women’s Ordination Conference (WOC) said it welcomed Francis’ move, while cautioning that appointing more women to Vatican posts “cannot alone address the injustices women face in the church”, citing “a culture of clericalism and sexism”.

“We also note the deep irony that women may now aid in selecting bishops, a role they themselves are prohibited from holding on account of their gender,” wrote the WOC, which advocates for the ordaining of women as deacons, priests and bishops.

A woman as pope and Jesuit