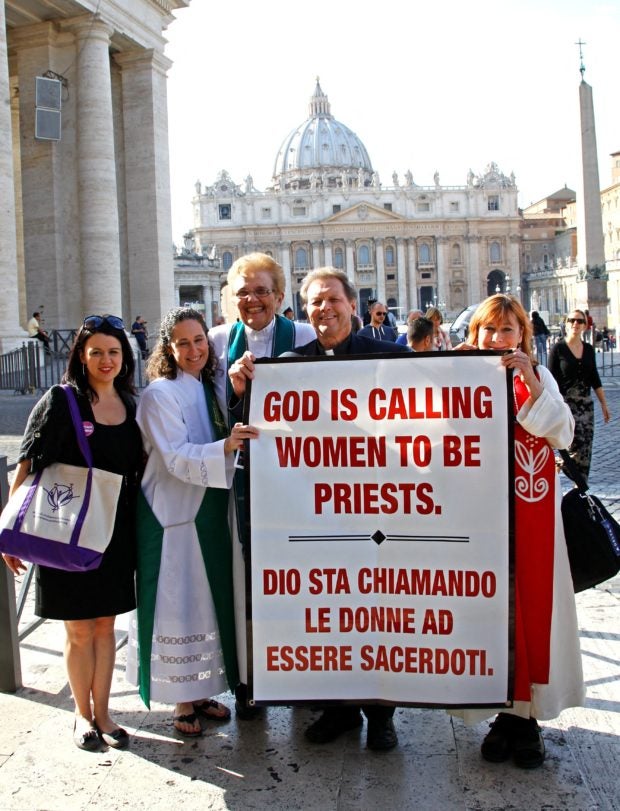 Father Roy Bougeois from Georgia (2nd R) poses with a group of Roman Catholic activist in front of the Vatican October 17, 2011. (REUTERS)

VATICAN CITY  – The Vatican has given space on its website to a Catholic group that demands the ordination of women priests during consultations ahead of a key meeting next year.

While the Church remains opposed to women priests, the inclusion of resource material from the Women’s Ordination Conference (WOC) is part of an opening up of debate on a range of issues that has pleased liberals but angered traditionalists.

It follows the publication last month of material from a Catholic gay rights advocacy group on the same part of the website dedicated to the meeting, which is known as a synod.

That publication was criticised by Catholic conservatives who have accused Pope Francis and the Vatican of sending mixed signals on traditional teachings.

“The courageous dialogue called for by the synodal process must include open conversation about women’s ordination,” WOC said in a Tweet welcoming the inclusion of its material on the synod website.

The U.S-based organisation’s package of background material is called “Let Her Voice Carry – a Synod Toolkit for Ordination Justice Advocates”.

The group calls itself the “uncompromising feminist voice for women’s ordination and gender equity in the Roman Catholic Church” and its leaders assist at the ordinations of female priests, which Church leaders say are illegitimate and invalid.

The 2023 synod, called “For a Synodal Church: Communion, Participation and Mission” is already steeped in division.

Supporters see it as an opportunity to change the Church’s power dynamics and give a greater voice to lay Catholics, including women, and people on the margins of society.

Pope Francis has said he wants the long consultative phase to be broad and inclusive, but conservatives say the three-stage process of dialogue – local, national and international – may erode the hierarchical structure of the 1.3 billion member Church and, in the long run, dilute traditional doctrine.

The Catholic Church teaches that only men can be priests because Jesus chose only men as his apostles.

Supporters of a female priesthood say Jesus was merely conforming to the customs of his times and that women played a greater role in the early Church than is commonly recognised.

The pope has ruled out a female priesthood, saying the “door is closed” on the issue.

He has allowed women to have greater roles in a number of Vatican departments.