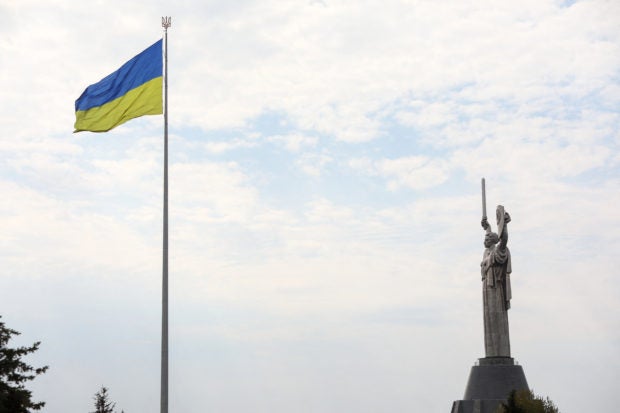 A Ukrainian flag waves in front of the Motherland monument at the World War II open-air museum in Kyiv on May 8, 2022, a day before ‘Victory Day’ is commemorated in Ukraine. (Photo by Aleksey Filippov / AFP)

“In response… Ukraine announces it is cutting diplomatic relations with the Democratic People’s Republic of Korea,” the statement said.

“Russia no longer has any allies in the world, with the exception of countries that depend on it financially and politically,” Ukrainian Foreign Minister Dmytro Kuleba said, according to the statement.

Kuleba said Russia had appealed to North Korea to recognize the territory in a move that “speaks more about Moscow’s toxicity than Pyongyang’s.”

Russia recognized the self-proclaimed republics shortly before it launched its invasion of pro-European neighbor Ukraine on February 24.

Earlier Wednesday, the separatists’ representation in Moscow issued a photo on Telegram showing its envoy Olga Makeyeva receiving what she described as a letter of recognition from North Korea’s ambassador, Sin Hong-chol.

Donetsk and neighboring Lugansk lie in the Donbas coal region in eastern Ukraine.

The region has been partially controlled by pro-Russian forces since 2014, a move that followed Russia’s annexation of the Ukrainian peninsula of Crimea.

The 2022 offensive has been defended by Russia in part as the need to protect the two separatist entities.

The Donetsk separatists inaugurated their “embassy” in Moscow on Tuesday and said then they were in talks with North Korea on possible recognition.

Separatist officials have long said they want their regions to eventually join Russia.