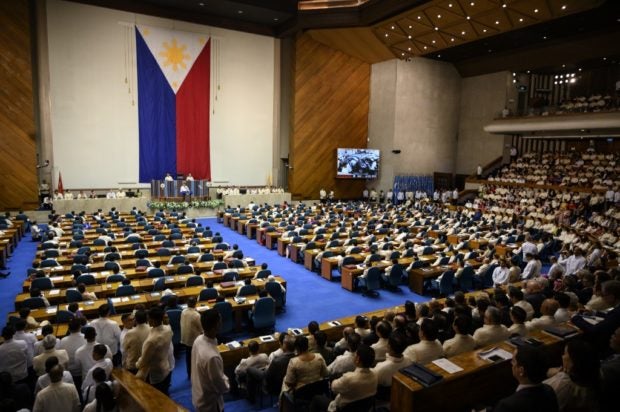 Plenary of the Batasang Pambansa in Quezon City. Photo by Noel CELIS / AFP

MANILA, Philippines — A new tax reform package that would set the maximum individual income tax rate at 20 percent and spare from tax a person’s first P400,000 annual earnings is being pushed by lawmakers in the House of Representatives.

Alliance of Concerned Teachers (ACT) Rep. France Castro and other members of the Makabayan bloc on Tuesday filed a still unnumbered House bill called the Tax Reform Act for the Masses and the Middle Class (TRAMM), which they believe could solve economic woes and other supposedly anti-poor tax packages.

In the bill’s explanatory note, Castro and the other lawmakers said they believe tax reform is necessary, especially amid steadily rising prices of basic commodities and fuel products due to inflation and other external factors.

Currently, the national government collects an income tax rate ranging from 5 to 32 percent, depending on how much a person earns. But if the Makabayan lawmakers’ bill becomes a law, the tax rate would range from 1 to 20 percent while exempting the first P400,000 annual personal income from taxing — giving low-income earners more safety net and a chance to earn more.

“Rising prices and untamed inflation rates in the past few years all the more justify the need for a tax reform package that would reduce the income tax rates of the overburdened Filipino working-class families,” the lawmakers said.

“Reducing income tax rates for working families will not only improve their way of life but also strengthen their purchasing power which will boost overall domestic demand for consumer goods,” they added.

Castro and the other lawmakers said that under their proposed measure, the Bureau of Internal Revenue would be tasked to make a personal income tax rate bracket composed of 10 classifications, starting from one percent up to 20 percent, relative to lowest to highest individual income.

Also, the legislators said, the cap on tax-free bonuses would be raised to P150,000 — which means that if the accumulated bonus for a year were below this figure, it would be given tax-free.

The Makabayan bloc believes that lowering income taxes would make industries competitive, especially since the Philippines has higher tax rates compared to more progressive and capable countries like Singapore.

“Our country remains among the most unequal in the world with income shares of the poorest and richest segments of the population almost stagnant for decades and now, personal income tax rates for the poor and middle-class citizens in the Philippines are even higher than rates in other countries such as Singapore,” Castro said.

“Other countries also have additional personal allowances and/or tax exemptions for dependents, unlike here in the Philippines,” she added.

During the Duterte administration, two tax packages were passed: the Tax Reform for Acceleration and Inclusion (TRAIN) law and the Corporate Recovery and Tax Incentives for Enterprises (CREATE) law.

However, the Makabayan bloc and other sectors believe both tax reform measures are anti-poor, as the TRAIN law imposed additional excise taxes on oil products despite lowering income tax rates.

For CREATE law, groups claim that only corporations benefit from the tax exemptions, which in theory was supposed to drive up jobs as the burden on companies was lightened.

“For example, tax exemptions for couples and those with dependents were abolished, while corporate tax rates were reduced. The Philippine government, while refusing to grant tax exemptions for poor and middle-class families, has been very generous in giving tax exemptions to big corporations, on top of the usual business incentives,” they added.

Over the past few weeks, groups have called on President Ferdinand Marcos Jr.’s administration to either remove excise taxes on fuel or the value-added tax on electricity to alleviate the suffering of the masses.

Data from the Philippine Statistics Authority showed that prices of goods are still rising, particularly food and transportation, as the headline inflation for June hit 6.1 percent — a three-year high and way higher on a year-on-year basis.