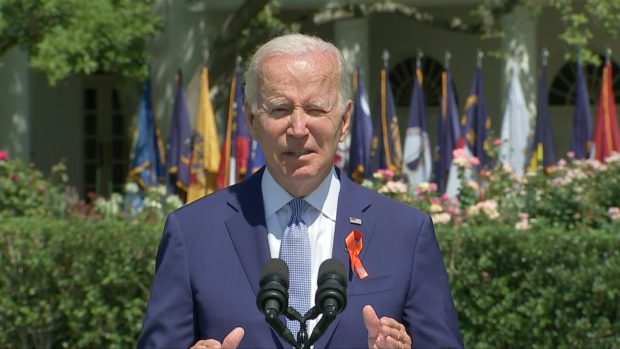 US President Joe Biden says that a flood of guns is turning US communities into “killing fields.” In a White House ceremony to mark new gun control legislation that he signed on June 25, Biden says it is the first significant progress in 30 years. “This legislation is real progress but more has to be done,” he says. | PHOTO: AFP

WASHINGTON — US President Joe Biden said Monday that a flood of guns is turning US communities into “killing fields” and vowed to reinstate a ban on assault rifles.

In a White House ceremony to mark new gun control legislation that he signed on June 25, Biden said it was the first significant progress in 30 years, but did not go far enough to rein in US gun violence.

“This has taken too long, with too much of a trail of bloodshed and carnage,” Biden said.

“The past many years, across our schools, places of worship, workplaces, stores, music festivals, nightclubs, and so many other everyday places, they have turned into killing fields.”

In addition, Biden said, every day there are “tragic killings that don’t make the headlines.”

“Neighborhoods and streets have been turned into killing fields as well,” he said.

Biden pledged to restore a ban on assault rifles that existed from 1994 to 2004. After it was lifted, millions of the high-powered semi-automatic war weapons were sold across the country, and used repeatedly in mass shootings.

“I’m determined to ban these weapons again…. I’m not going to stop until we do it,” he said.

Biden also called for legislation that would require gun owners to store their guns securely in homes, saying he himself did so with the shotguns he owns — two his, and two of his late son.

“I have four shotguns… that are locked up,” he said. “Every responsible gun owner that I know does that.”

Biden said he supports the constitutional right to bear arms, but also pointed out that guns have become the number one killer of children across the country.

“We also have a right to live freely, without fear for our lives,” he said.