No place is safe: mass shootings in America | Inquirer News 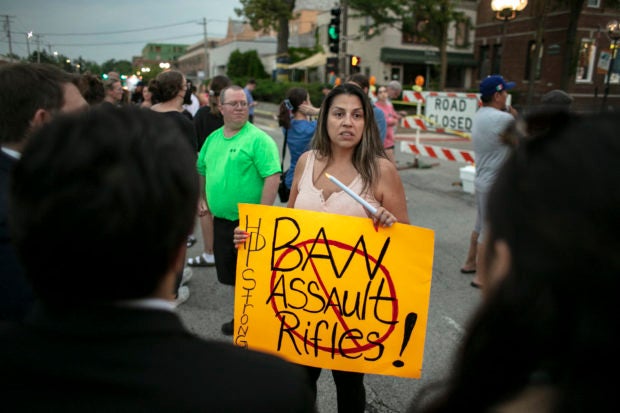 A woman protests assault rifles near the scene of a mass shooting yesterday at a Fourth of July parade, on July 5, 2022 in Highland Park, Illinois. AFP

The most recent mass shooting in the United States, which left seven people attending an Independence Day parade in Highland Park, Illinois dead on Monday, underlined the fact that — in a nation awash with guns — no community is immune.

There was no way to predict the locations in any of the shocking shootings of the last two months, and in each, people never anticipated it would come to their homes.

“You hear these things on the news. And they are horrifying. And then it’s in your own front yard. And you just can’t believe it’s real,” Highland Park Mayor Nancy Rotering said on CBS. 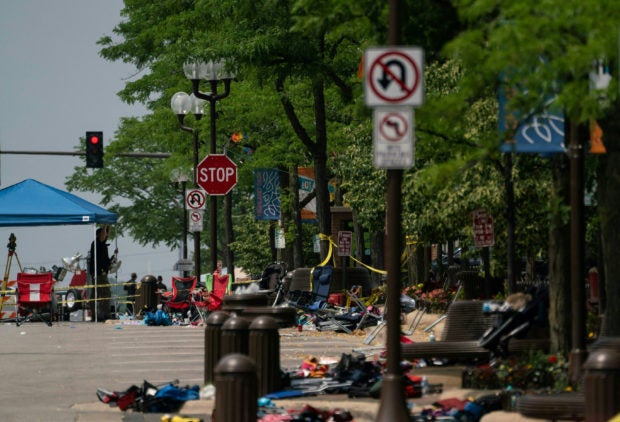 Chairs and belongings are seen left behind at the scene of a mass shooting at a July 4th Parade in downtown Highland Park, Illinois on July 5, 2022. AFP

In addition to the fatalities at Highland Park, the shooting at a Tops supermarket in Buffalo, New York on May 14 left 10 dead; while 21 people, mostly young children, were killed at the primary school in Uvalde, Texas on May 24.

Though the locations and communities targeted were varied, like most high-profile and deadly mass shootings in America they shared two things: they were undertaken by apparently disillusioned young white men.

The 18-year-old racist who targeted specifically African-Americans in Buffalo planned his attack for months, surveying the site ahead of time, and stockpiling several weapons and large amounts of ammunition.

It was another teen who killed the 19 children and two teachers in Uvalde; his planning was less clear but it came just eight days after he turned 18, when he was able to buy his two guns and hundreds of rounds of ammunition.

Identical to the others, Crimo used a semi-automatic AR-15 style rifle.

When he was caught later Monday, he had another rifle in his car, and more than one handgun in the place he was living, according to Chris Covelli, Lake County deputy police chief.

“They were in his name. They were legally purchased,” Covelli said.

The AR-15 plays a central role in most deadly mass shootings, and since a ban was lifted in 2004, millions of assault rifles like it have been sold around the country.

Designed as a war weapon rather than for hunting, it shoots high-powered rounds that tear gaping wounds in their targets. And it shoots them fast.

Crimo fired more than 70 rounds in a few minutes from a rooftop onto the July 4 parade, killing six and wounding at least 30.

The Uvalde shooter fired off more than 160 rounds, and the Buffalo killer more than 50.

Random mass shootings such as the one in Highland Park are only one component of US gun violence.

Another is the frequent handgun shootings in urban areas, that are often targeted, such as those which involve drug-dealing rivals.

The Gun Violence Archive defines a “mass shooting” as a single incident in which at least four people are wounded or killed.

It counted 20 such shootings across the United States over the long July 4 holiday weekend alone.

Most of those appeared to involve handguns, millions of which are sold each year.

“It does not have to be this way, yet we as a nation continue to allow this to happen,” said Illinois Governor J.B. Pritzker.

“Mass shootings have become our weekly American tradition,” he said.

Despite frequent calls for the government to ban assault rifles — especially after each high-profile mass shooting — lawmakers in the US Congress remain divided on the issue, with mostly Democrats in favor and Republicans opposed.

After the two shootings in May, Congress took limited action, legislating enhanced background checks for younger buyers and supporting “red flag” laws that allow courts to temporarily remove weapons from those considered a threat.

But there were no new controls on sales of guns, which topped 11.3 million in 2020 alone.

“What was supposed to be a celebration of freedom in Highland Park, Illinois yesterday turned into a massacre because our communities are flooded with weapons of war,” said Democratic Senator Dianne Feinstein, long an advocate for an assault rifle ban.

“It’s shameful that we have allowed mass shootings to become so commonplace in the United States,” she said.