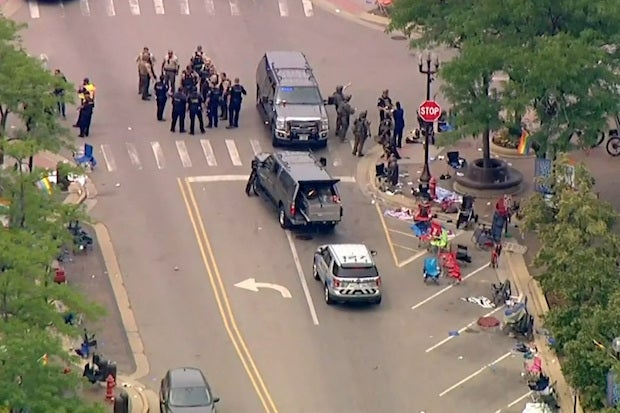 Police deploy after gunfire erupted at a Fourth of July parade route in the wealthy Chicago suburb of Highland Park, Illinois, U.S. July 4, 2022 in a still image from video. (ABC affiliate WLS/ABC7 via REUTERS)

HIGHLAND PARK, Illinois — Six people were killed and at least two dozen were injured when an apparent rooftop gunman opened fire at a Fourth of July parade in the wealthy Chicago suburb of Highland Park on Monday, officials said, sending panicked spectators fleeing from the scene.

Officials told a news conference that six people were killed and 24 were taken to the hospital and a rifle was recovered from the scene.

Police were searching for a white male, believed to be about 18 to 20 years old, and asked the public for tips to help find him. Police said initial reports suggested he fired from a rooftop.

“Our community was terrorized by an act of violence that has shaken us to our core. Our hearts go out to the families of the victims during this devastating time,” Highland Park Mayor Nancy Rotering told the news conference.

The shooting comes with gun violence fresh on the minds of many Americans, after a massacre on May 24 that killed 19 school children and two teachers at an elementary school in Uvalde, Texas, and the May 14 attack that killed 10 people at a grocery store in Buffalo, New York.

“The vast majority suffered gunshot wounds. Remaining individuals sustained injuries as a result of chaos at the parade,” Anthony said.