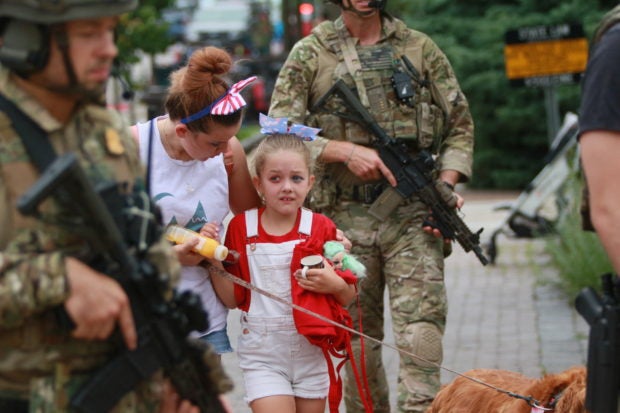 Law enforcement escorts a family away from the scene of a shooting at a Fourth of July parade on July 4, 2022 in Highland Park, Illinois. AFP

HIGHLAND PARZK, United States—The deadly shooting spree at a July 4th parade in a suburb of Chicago, which left at least six dead and two dozen more wounded, is only the latest in a particularly brutal spate of gun violence in the United States.

This one, which President Joe Biden called “senseless,” came on a holiday meant to celebrate American independence — a day typically reserved for family summer fun, including at community parades with marching bands and other entertainment.

Here is a brief look at six high-profile mass shootings so far this year:

January 23: Six people are found shot dead during a welfare check on a home in Milwaukee, Wisconsin. A 34-year-old man has been charged with the murders, in which appeared to be a robbery gone wrong.

April 3: Six people are killed in an apparent gun battle that erupted as nightclubs were emptying in downtown Sacramento, the state capital of California.

May 14: A white teenage gunman kills 10 people at a supermarket in a predominantly Black neighborhood of Buffalo, New York.

May 24: Nineteen young children and two teachers are killed when a teenage gunman goes on a shooting rampage at an elementary school in Uvalde, Texas — America’s worst school shooting in a decade.

June 1: A man who blamed a surgeon for pain he suffered after back surgery storms into a hospital in Tulsa, Oklahoma, and fatally shoots four people including the doctor.

July 4: At least six people are killed when a gunman armed with a high-powered rifle opens fire at an Independence Day parade in Highland Park, Illinois.

The United States has suffered 309 mass shootings so far this year, including at least three others beside the Illinois one, according to the Gun Violence Archive.

It defines mass shooting as one in which at least four people are wounded or killed, not including the shooter.