Majority or minority? Still no word on Cayetano siblings’ choice 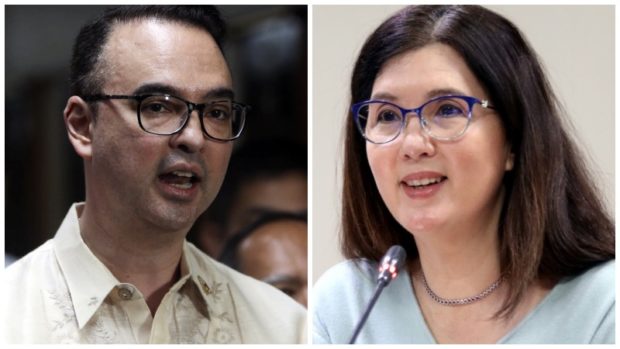 MANILA, Philippines — Sibling Senators Alan Peter Cayetano and Pia Cayetano are keeping their colleagues guessing on whether they will join the majority or minority in the Senate.

Their silence has also left the leadership of the minority bloc hanging with only two weeks to go before the 19th Congress convenes on July 25.

“No word yet. So far just the two of us [in the minority],” Sen. Aquilino Pimentel III said, referring to himself and Sen. Risa Hontiveros.

There was no immediate comment from the Cayetano camp.

Asked if the matter of the minority leadership has been settled, Pimentel told the Inquirer that it’d be easy to determine if it were only up to him and Hontiveros, who was the only opposition candidate to be reelected to the Senate and the only previous member of the minority.

“If only two, then it is very easy for us to negotiate between us and decide who is designated as what,” he said in a Viber message.

Last month, Pimentel, who served as Senate president from 2016 to 2018, said Hontiveros had agreed to nominate him as the next minority leader.

Last week, Sen. Juan Miguel Zubiri, who is expected to be elected as the Senate president, released a list of key posts and chairmanships in the 24-member chamber.

Only Pimentel and Alan Peter Cayetano were not given a chairmanship. Hontiveros was to retain the Senate committee on women, children, family relations and gender equality, while Pia Cayetano was to head the sustainable development goals, innovations and futures thinking committee.

By tradition and practice, the Senate minority leader holds no chairmanship but sits as an ex-officio member in all committees. But Pimentel said there was no specific rule preventing the minority leader from chairing a committee.