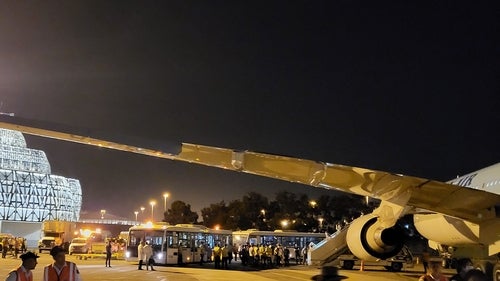 This photo, provided by a passenger, shows the KE9956 plane of Korean Air Lines Co. that made an emergency landing at Heydar Aliyev International Airport in Baku, the capital of Azerbaijan, on Saturday (local time), less than two hours after its departure from Istanbul, after detecting an engine defect. (Yonhap via The Korea Herald/Asia News Network)

ISTANBUL/SEOUL — A Korean Air plane that departed from Turkiye made an emergency landing in Azerbaijan after a defect was found in one of its engines, the Seoul-based firm said Sunday.

The Incheon-bound KE9956 aircraft with 215 passengers and 10 crew members aboard landed at Heydar Aliyev International Airport in the capital of Baku, about 1 1/2 hours after taking off from Istanbul at 6:25 p.m. on Saturday (local time).

A vibration sensor message emerged from the No. 2 engine on the right, and the captain immediately notified the passengers of the glitch and the change of the flight course to an airport in the closest vicinity for the emergency landing, according to the airline.

No one was hurt from the incident, with passengers transported to a nearby hotel.

Some passengers reportedly saw sparks from the engine, and those who sat near the right wing are known to have felt vibration, noise and even heat.

Korean Air said it will send a temporary flight around noon to bring the passengers back home. The plane is scheduled to return to Incheon International Airport at around 7 a.m. on Monday.

Passengers run off after plane makes emergency landing in Spain