US, China top diplomats meet in new bid to lower the temperature 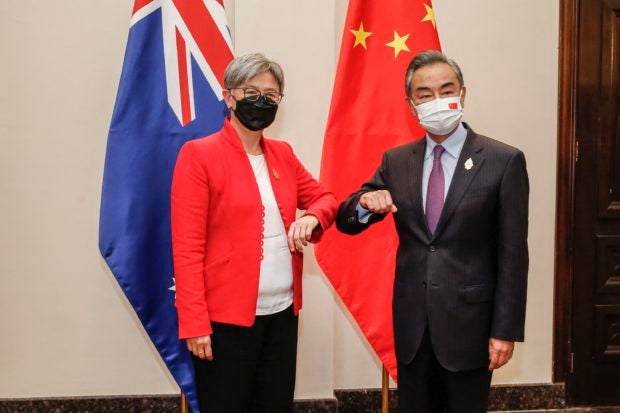 BALI, Indonesia  – The top diplomats from the United States and China are set to meet Saturday in Bali in a fresh bid to prevent sky-high tensions from spiralling out of control.

Secretary of State Antony Blinken and Foreign Minister Wang Yi will hold a morning of talks and a working lunch on the Indonesian resort island after taking part in a gathering of the Group of 20 major economies.

With the West isolating Russia over its invasion of Ukraine and uncertainties rising on the global economy, China and the United States have both made cautious moves to keep a lid on their own myriad differences.

Daniel Kritenbrink, the top US diplomat for East Asia, said that Blinken will seek “guardrails” in the relationship between the world’s two largest economies.

The United States will seek “to do everything possible to ensure that we prevent any miscalculation that could lead inadvertently to conflict,” Kritenbrink told reporters.

Blinken and Wang will be meeting in person for the first time since October and set the stage for expected virtual talks in the coming weeks between Presidents Joe Biden and Xi Jinping.

Since last month, the United States and China have also held talks between their defence, finance and national security chiefs, and top military commanders.

China’s state-run Global Times, known for its criticism of the United States, wrote that the growing interaction “underscored the two sides’ consensus on avoiding escalating confrontation.”

But tensions remain high, especially on Taiwan, with the United States airing concern that China is stepping up pressure on the self-ruling democracy, which it considers part of its territory.

US views of China have hardened in recent years and Biden has largely maintained the substance of his predecessor Donald Trump’s hardline approach of seeing Beijing as the pre-eminent global competitor of the United States.

But Blinken in a recent speech made clear that the United States was not seeking a new “Cold War,” even as he held firm on criticism — including accusing Beijing of genocide against the mostly Muslim Uyghur people.

The Biden administration is widely expected soon to ease some of Trump’s tariffs on Chinese goods, a move that could ease soaring inflation, which has become a major political liability in the United States.

US officials have also been cautiously upbeat about China’s stance on Ukraine, condemning its rhetorical backing of Russia but seeing no sign that Beijing is backing its words with material support.

“What was striking was how measured and, sort of, subdued” China was on Ukraine during Friday’s closed-door G20 talks, one official said, amid US-led attempts to isolate Russian Foreign Minister Sergei Lavrov, who diplomats said walked out amid Western criticism.

Wang did not offer “any full-throated endorsement or any sort of signal that China and Russia have this kind of pact,” the official said on condition of anonymity.

US officials are keenly aware that any minor honeymoon with China could be fleeting.

Xi, China’s most powerful leader in decades, is expected to shake up the foreign policy team at the Communist Party’s National Congress later this year.

But Craig Singleton, who follows China at the hawkish Washington-based Foundation for Defense of Democracies, expected Xi again to appoint technocrats who can work with Washington.

“The reason is simply — China’s economy is facing considerable headwinds and Chinese policymakers appear eager to recognise that China’s aggressive rhetoric has backfired,” he said.