G20 ministers to meet in Bali with Ukraine top of agenda 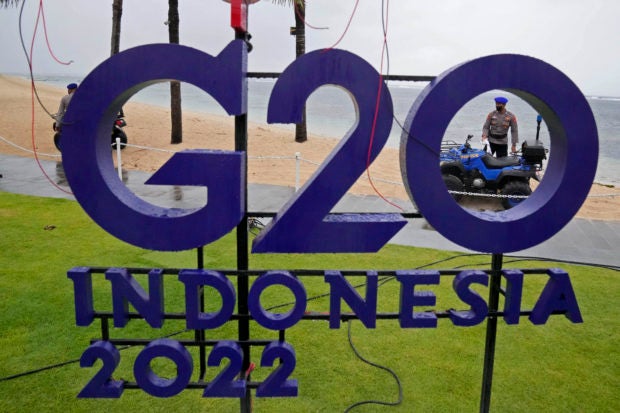 A police officer patrols ahead of the G20 Foreign Ministers’ Meeting in Nusa Dua on July 7, 2022. (AFP)

BALI, Indonesia – The Group of 20 will meet in Bali Friday with the United States pushing the world’s top economies to pressure Russia over its invasion of Ukraine, as Washington and Moscow’s top diplomats prepare for their first showdown since the war began.

US Secretary of State Antony Blinken will also seek to reopen dialogue with Beijing in talks with his Chinese counterpart Wang Yi, the first in months after tensions strained over issues including Taiwan.

But Blinken will shun a direct meeting with Russian Foreign Minister Sergei Lavrov, instead pointing the finger at Moscow for triggering global food and energy crises and calling on G20 members to back a UN initiative to re-open sea lanes blocked by the war.

“You’ll see that we will have an ability as necessary to make clear Russia’s responsibility for some of the very problems that the G20 is going to be tackling,” a senior US official said Thursday.

The meeting is a prelude to the leaders’ summit on the Indonesian resort island in November that aimed to focus on the global recovery from the Covid-19 pandemic.

But attention has shifted to Moscow’s invasion of Ukraine after it rattled global markets, sent food prices skyrocketing and led to allegations of Russian war crimes.

The meeting will put Blinken and Lavrov in each others’ crosshairs for the first time since the outbreak of war.

They last met in January in Geneva, where the top US diplomat warned Russia of massive consequences if it invaded Ukraine, which it did on February 24.

Host Indonesia has resisted pressure to uninvite Russia, inviting Ukrainian Foreign Minister Dymytro Kuleba virtually as a compromise, but the threat of a boycott has loomed over proceedings.

The US State Department declined to comment on the “choreography” in Bali or whether Blinken would walk out of any meetings where Lavrov is present.

But there will be no family photo of the G20 ministers as is customary, an Indonesian government official told AFP.

The talks between Blinken and Wang on Saturday — their first since October — will seek to address tensions between the world’s two largest economies.

A top US official for East Asia said the pair would discuss “guardrails” on competition but said Blinken — who recently identified Beijing as the main threat to world order — would also explore areas of cooperation.

The meeting comes as US President Joe Biden voices hope for a conversation in the coming weeks with Chinese President Xi Jinping, with whom he last spoke in March.

US concerns have also been growing over Taiwan, with Biden vowing to defend the island if China invades the self-governing democracy that it views as its territory.

Lavrov met Wang on Thursday to discuss Russia’s invasion, which Moscow says it launched to stop Ukraine from joining the NATO military alliance.

Lavrov told Wang that Russia’s position on Ukraine is finding support from “an increasing number” of countries.

The US has condemned Beijing’s support for Russia and Blinken is expected to reiterate those warnings in talks with Wang.

But Blinken’s hopes of a united Western front against Moscow were damaged after British Prime Minister Boris Johnson resigned as leader of the Conservative party on Thursday.

It prompted British Foreign Minister Liz Truss to cut short her Bali trip and pull out of Friday’s meeting, a diplomat told AFP, without specifying when she would fly back to London.

She will be replaced at Friday’s talks by a senior British official, the diplomat said.