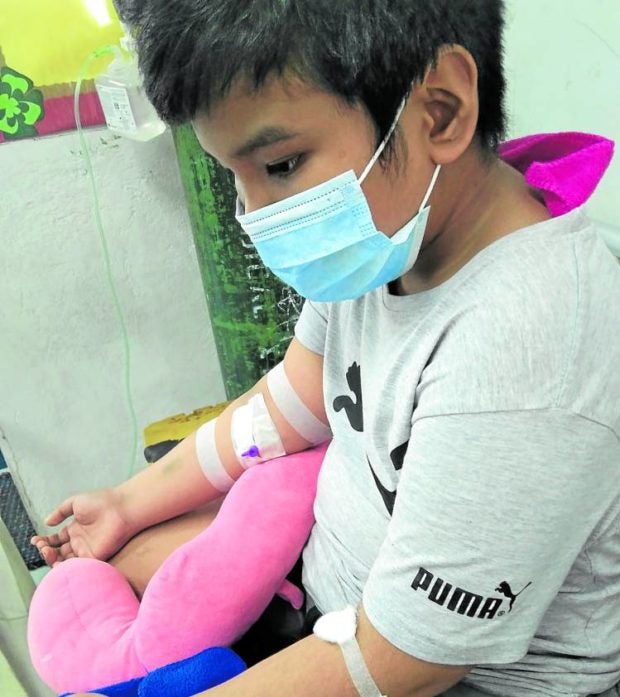 Ralph Montemayor is a good big brother, his mother Meachel Tejerero tells the Inquirer over the phone.

“Even with his condition, he never wanted to become a burden,” she continues, a little emotional.

The 11-year-old Montemayor was diagnosed with acute lymphoblastic leukemia in 2018, and had to stop attending school because of side effects from treatment. He was supposed to undergo four years of chemotherapy but in May, cancer cells were found to have spread to other parts of his body.

His mother holds back tears as she recounts how her son’s condition “went back to zero.”

When the pandemic hit, Montemayor tested positive for COVID-19 seven times but was thankfully spared from the worst symptoms. Still, he was unable to undergo treatment regularly, resulting in a relapse.

He and his mother now travel daily from Taytay, Rizal, to Philippine Children’s Medical Center (PCMC) in Quezon City for checkups and a slew of laboratory tests to make sure his condition doesn’t further worsen.

In June, Montemayor was confined for a week due to more side effects. Tejerero says that his being far away from home is hard on one of his younger siblings.

“His brother Charles is 6, and he’s become my helping hand. He’s the one who helps me take care of Ralph, and he missed his brother so much when he was confined,” she explains.

Tejerero says her children have a close bond, with Ralph even taking care of the family’s newborn baby despite his illness.

“He’s the one playing with the baby, he’s the one looking after him when I can’t,” she adds.

The family of six solely depends on the income of her husband, Charlemagne Selorio Catabay, a gas station employee who earns around P15,000 monthly.

Montemayor is set to undergo 14 cycles of chemotherapy for his relapse, with drugs such as methotrexate for chemo treatment, and maintenance medicines like co-trimoxazole and ondansetron which treats side effects such as infections and nausea.

Each month, the family spends around P30,000 for transport fare to and from the hospital, Montemayor’s medications and laboratory tests, including blood work, cytosine and creatinine.

A genetic test costing P10,000 per session has also been scheduled to check for signs of remission while Montemayor will undergo radiotherapy as well later this year. Tejerero says the procedure will have to be done in a private hospital since it is unavailable at PCMC.

Those who wish to contact Tejerero can reach her at 0927-7095537. Donors can send help to Montemayor through his father’s BPI bank account (1889317392) under the name, Charlemagne Selorio Catabay.