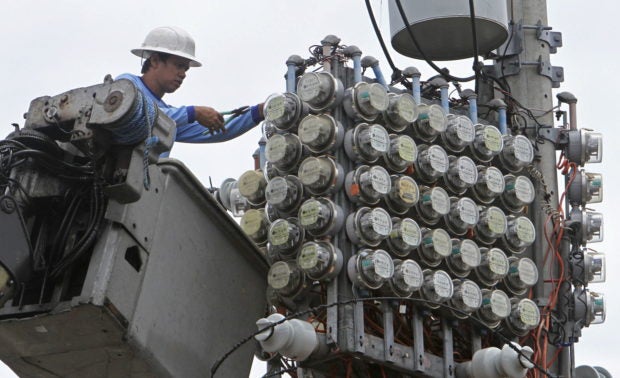 MANILA, Philippines—The dependence of energy companies on fossil fuels, “which has always been incapable of meeting the country’s energy demands,” has serious consequences.

This was stressed by environmental group Greenpeace on Tuesday (July 5) as it asked the Manila Electric Company (Meralco) and other energy corporations in the country to stop passing the burden of these consequences to consumers.

Its statement came as the Supreme Court (SC), in a 6-5 vote, upheld the Energy Regulatory Commission’s (ERC) approval of Meralco’s bid to charge consumers on a staggered basis and recover P22.64 billion in generation costs.

The SC, which ruled that the ERC did not commit grave abuse of discretion, said the approval was in accordance with the Guidelines for the Automatic Adjustment of Generation Rate System Loss Rates by Distribution Utilities (AGRA).

The ruling stressed that Section 1, Article VIII of the AGRA states that “the ERC may allow an exception from any provisions of these guidelines, if such exception is found to be in public interest and is not contrary to law.”

This, as Senior Associate Justice Marvic Leonen said that the ERC did not conduct the necessary investigation into whether Meralco’s basis for additional charges was proper. 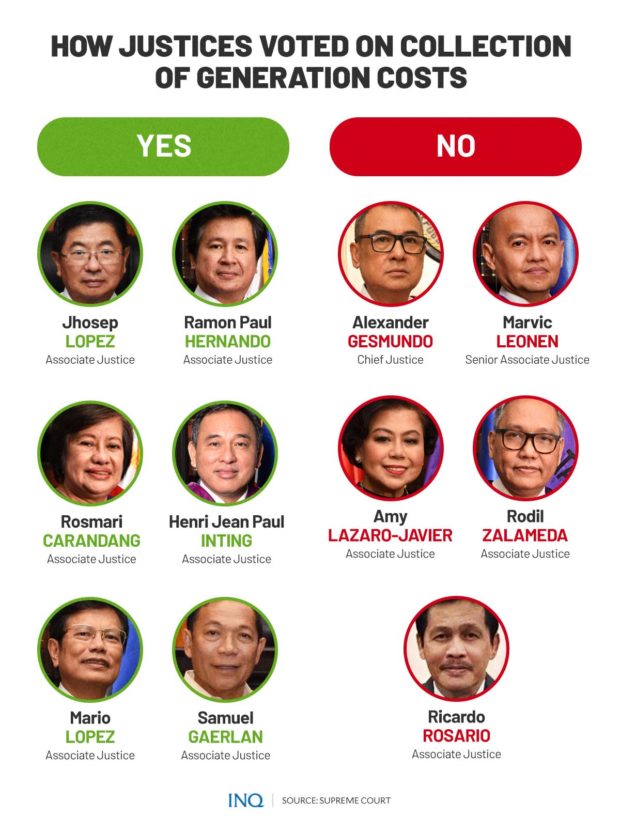 “The sheer speed at which the ERC moved in favor of Meralco’s plea demonstrates an abject inability to act in keeping with its mandate, the imperative of public interest, and the vast competencies vested in it,” Leonen said in a dissenting opinion.

“It should have initiated investigations even prior to the Joint Congressional Committee. The mention of such high increase by Meralco should have triggered the ERC to make relevant inquiries to protect the public.”

It was in 2013 when petitions were filed by Bayan Muna and the National Association of Electricity Consumers (Nasecore) to challenge the “lack of due process” and the ERC’s “grave abuse of discretion” in approving the power rate hike.

Javier said in her dissenting opinion that “one fine morning in December 2013, people in Metro Manila and nearby provinces could have woken up to an additional P800 to their 200 per kWh bill in November 2013.”

“This increase represented 61 percent of P4.15 per kWh more than the average bill in November 2013. The total amount of this increase which every household would have to contribute to was P22.64 billion,” she said.

The increase, Javier stressed, was not to pay for the household’s additional use of electricity. Rather, it was for just one of the amounts billed and collected by Meralco—here, for purchasing electricity from power generating companies. 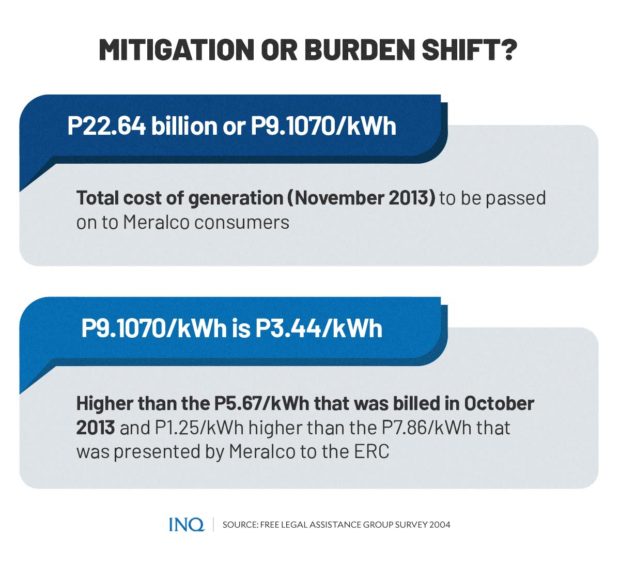 It was on Dec. 5, 2013 when Meralco wrote to the ERC, stating that as early as Oct. 10, 2013, it sought an audience with the agency on the expected impact of the Malampaya shutdown and the maintenance of other power generation plants.

Meralco said that it had taken measures to mitigate the impact of the shutdown, but the projected generation cost for November 2013 was still expected to go up to P7.86 per kWh.

This would mean, however, that of the total generation cost of P22.64 billion incurred in November that year, P3 billion will have to be collected at a later period. Meralco proposed to add the deferred amount of P3 billion in the February 2014 billing. 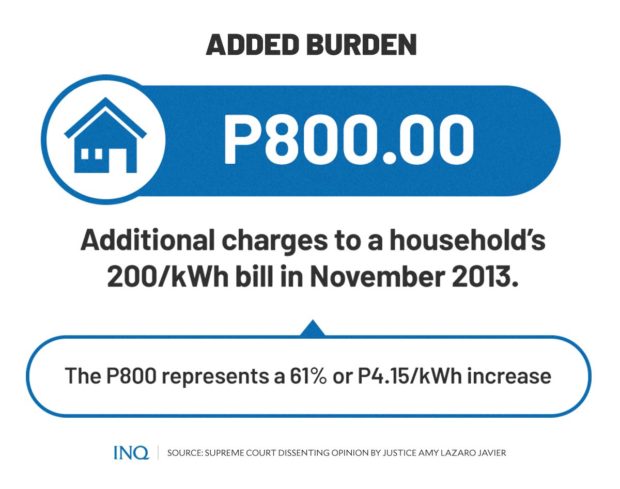 Meralco’s proposal to charge consumers on a staggered scheme was approved by the ERC on Dec. 9, 2013, but the request to also charge carrying costs was denied by the commission.

Greenpeace said the latest development exposes the consequences of Meralco and all energy corporations’ dependence on fossil fuels, saying that Meralco might encounter inflexibility due to the expected depletion of Malampaya in 2027.

“Our continued dependence on fossil fuels means we are subject to price volatilities we cannot control, and to finite fuel sources—such as the Malampaya gas field—which will betray us when supplies run out,” it said.

It was last year when Greenpeace challenged Meralco, one of the country’s biggest energy companies, to break away from fossil fuels and have its operations shift to renewable energy (RE).

The report “Decarbonizing Meralco,” which was written by Greenpeace and the Center for Renewable Energy and Technology (CREST), said the company can shift to RE, while assuring a reliable, cheap, and secure supply of electricity.

It said Meralco relies heavily on “dirty power sources,” with 97 percent fossil fuels in its energy mix. The data on the company’s power supply agreements shows that fossil fuels will remain dominant at 94 percent, with RE shares at only 6 percent.

The report stated that based on the company’s electricity purchase data from 2014 to 2020, fossil fuels were dominant, covering 70 to 100 percent of the total purchased electricity.

“Roughly half of these purchases come from fossil gas, which typically covers 41 to 65 percent. Coal has a 12 to 31 percent share, while oil-based sources cover up to 15 percent of the energy mix,” it said.

READ: Greenpeace slams use of coal for power

Greenpeace stressed that renewables from power supply agreements with Meralco contribute a very negligible share of the energy mix at 1 to 2 percent. These small contributions mostly come from Meralco’s power purchases from renewable plants of AC Energy.

“There is no excuse for companies like Meralco to cling to outdated fossil fuel-centric business models that are destructive to the environment and people’s health and livelihoods,” said Greenpeace campaigner Khevin Yu.

Yu said “Meralco can very easily shift their focus to clean, renewable energy. All that is needed is the willingness to change and do the right thing–and a clear plan that shows how they will follow through with that commitment.”

“The report shows how Meralco stands to benefit from shifting to RE, as it would drive down their generation costs by 17.58 percent,” said CREST president Rei Panaligan. 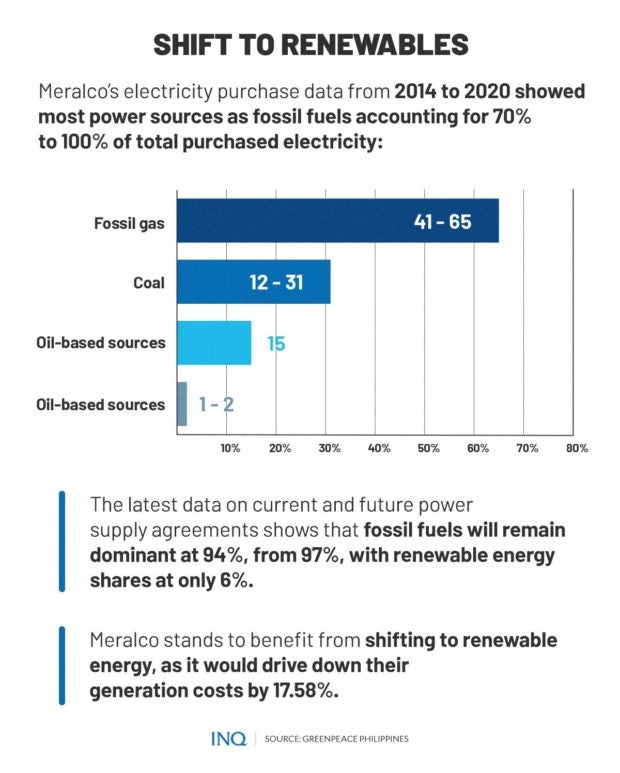 Greenpeace said Meralco has the prime opportunity to take the lead in shifting to RE, saying that the shift will decrease its generation costs, from which both Meralco and consumers stand to gain.

“Decarbonizing Meralco is a win-win solution for both the company and its shareholders as well as electricity consumers as it will lower costs, increase potential profit, and address the climate emergency and related harms coal and fossil fuel use inflict on communities,” it said.

The company, however, said that the push for sustainable power generation will cost P76 billion to be viable, stressing that the shift would need the attention and full commitment of the company’s board.

“Understanding the intermittent nature of most RE sources, geographical constraints, as well as technological limitations at this point in time, the use of RE sources to fulfill base load requirements remains challenging and comes with a premium price,” it said.

Meralco Powergen president Jaime Azurin said last year that “our strategy is to transition to low-carbon energy in an orderly and affordable manner to serve our broader purpose while securing long-term profitability.” 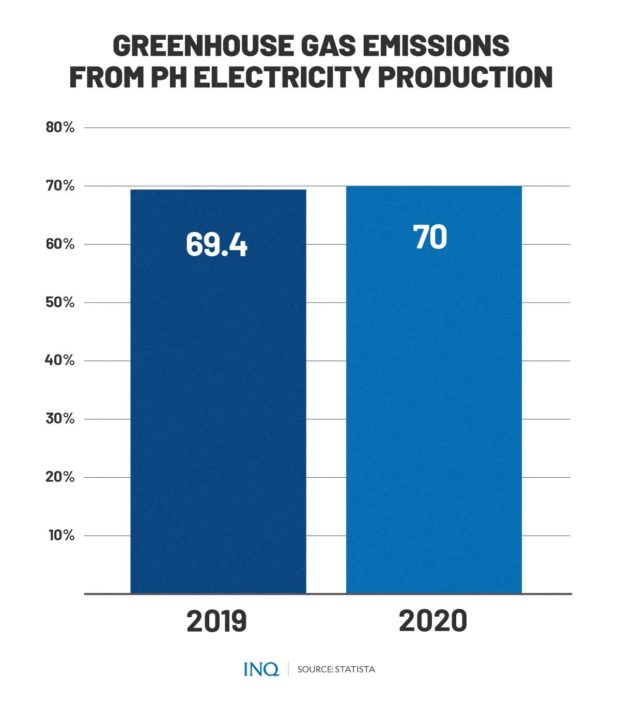 He said that a move to go green meant keeping the company’s competitive advantage, especially with consumer preference continuing to shift toward more environment-friendly initiatives.

The Meralco group has announced a 10-year strategy to transition to cleaner energy by developing 1,500 megawatts of RE projects in seven years, starting with the 55-MW BulacanSol project, owned by PowerSource First Bulacan Solar Inc.

Azurin said more solar projects were under way, including a 78-MW facility in Baras, Rizal. Others are expected to rise in Isabela province, Nueva Ecija and Ilocos Norte.

Without the shift to renewable energy, Greepeace said energy corporations should break from the “unjust practice of passing the burden of these consequences on to consumers.”

Former Rep. Carlos Zarate (Bayan Muna), who had asked the SC to indefinitely extend the TRO on Meralco’s rate hike, said that the decision “could not have come at a worse time.”

“With the prices of basic commodities still skyrocketing due to continued big-time oil price hikes and the weakening of the peso, this is another unwanted burden on our people,” he said.

“A financial burden like this, once Meralco imposes this new power rate hike–on top of the already high electricity rates, may already break the Filipino consumers’ backs.”

While Meralco said it has yet to assess the impact of the SC decision on electricity rates, the company told ANC that the ruling “allows Meralco to collect the price increase in November 2013 on staggered basis.”

“That would be a big win for consumers, especially if that would be implemented today when fuel prices are skyrocketing,” lawyer Ronald Valles, head of Meralco’s regulatory management, said.