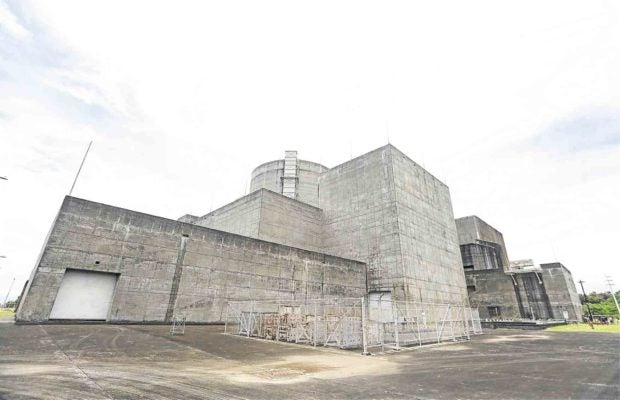 WHITE ELEPHANT The Bataan Nuclear Power Plant, built using foreign loans, has not produced a single watt of electricity after the government shut it down in 1986 due to safety and corruption issues. INQUIRER FILE PHOTO/LYN RILLON

MANILA, Philippines — Some members of the environmental group Greenpeace trooped to the Department of Energy headquarters in Taguig on Friday to call out the government’s plan to revive nuclear power as an alternative energy source.

The protest coincided with the 11th anniversary of the Fukushima Daiichi nuclear disaster in Japan, which killed almost 20,000 people and forced the evacuation of half a million people.

“It’s abhorrent how Secretary [Alfonso] Cusi, and his principal, President Duterte, have relentlessly pursued nuclear deals even up to their last few months in power when they could have doubled their efforts to ensure renewable energy gets a better foothold in the country’s future energy direction,” said Greenpeace campaigner Khevin Yu.

“This is the last thing we need now when we’re already facing a record-high debt of P12 trillion and skyrocketing prices of imported fuel,” he added.

“Setting up the country’s nuclear program and building a plant will take decades. Meanwhile, Filipinos will continue to suffer from climate impacts,” he said.

President Rodrigo Duterte last week signed an executive order (EO) that would pave the way to include nuclear power in the country’s energy mix.

“The State envisions nuclear power as a viable component to bridge the gap between rising energy demands and supply, taking into account learnings from the past, national, social and economic development pathways, as well as international legal and regulatory frameworks, and best practices,” according to the EO.