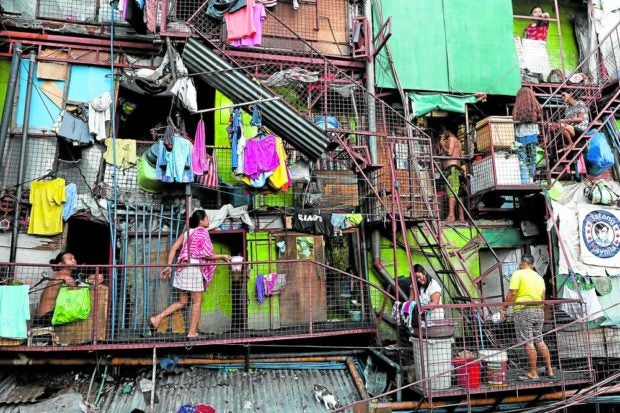 FILE PHOTO: Residents of a small apartment building in Tondo, Manila, do their house chores outside their units. A Philippine household needs to earn more than P12,082 a month to meet its members’ basic needs. —REUTERS

MANILA, Philippines — The new administration is aiming to reduce the country’s poverty rate to nine percent by the end of President Ferdinand Marcos Jr.’s term in 2028.

Department of Finance (DOF) Secretary Benjamin Diokno disclosed this Wednesday that such a goal is part of his agency’s medium-term fiscal consolidation framework that was presented during their first Cabinet meeting on Tuesday.

“We’re not only concerned with growth per se. We’re also concerned with reducing poverty, so our target is that by the end of President Marcos’ term, poverty incidence will be down to single-digit—nine percent,” Diokno said during a Palace briefing.

“I remember right, it started at around 25 percent during [former President Rodrigo] Duterte’s first year in office but we were almost down to around 18 to 17 percent then the pandemic hit us. So there’s a slight backsliding but our target under this framework is that the poverty rate will be down to nine percent by 2028,” he added.

The Marcos Jr. administration, according to Diokno, is also planning to elevate the Philippines to the upper-middle-class income status.

“We want to achieve what is called the upper middle-income status so that means that we are shooting for a $4,046 per capita income for Filipinos by the end of the President’s term,” he said.

This goal is also among the targets mentioned in DOF’s framework, which Diokno described as the government’s “game plan for the next six years.”

“We have discussed it (framework) yesterday, in the Cabinet, and it was approved. This framework will set the tone or will be our game plan for the next six years, this is the first time any government of the Philippines has presented such a game plan,” Diokno said.

“So we’re not only thinking of a one-year plan but a six-year plan,” he added.