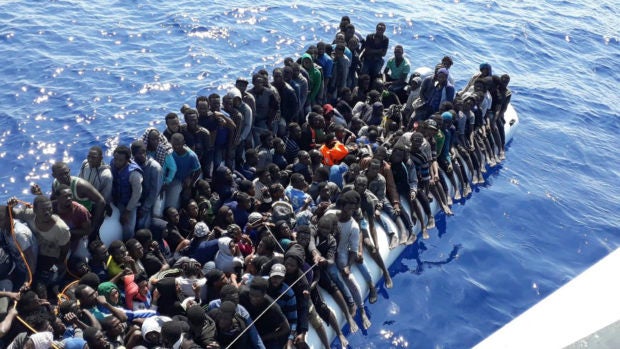 FILE – This Sunday, June 24, 2018, file photo provided by the Libyan Coast Guard shows migrants on a ship intercepted offshore near the town of Gohneima, east of the capital, Tripoli. The United Nations refugee agency says people smugglers are taking greater risks to ferry their human cargo toward Europe as Libya’s coast guard intercepts more and more boats carrying migrants, increasing the likelihood that those on board may die during the Mediterranean journeys. (Libyan Coast Guard via AP, File)

Geneva, Switzerland — Twenty-two Malian migrants died in a boat disaster off the Libyan coast, the UN said Tuesday, citing survivors who reported victims drowning and dehydrating with three children reportedly among the dead.

After nine days at sea, 61 survivors, mostly from Mali, were rescued by the Libyan coastguard and brought back to shore, the UN’s International Organization for Migration said, with the toll confirmed by Mali’s expatriates ministry.

The migrants embarked from the Libyan city of Zuwara, near the Tunisian border, on a rubber boat, at around 1:00 am (2300 GMT) local time on June 22, said IOM spokeswoman Safa Msehli.

“After nine days at sea, they were picked up by the Libyan coastguard,” she said.

They were brought back to shore on Saturday.

“According to the survivors, 22 migrants, all from Mali, died during the journey. Reported causes of death are drowning and dehydration. Among the dead are three children,” said Msehli.

“The total number of survivors is 61, with the majority from Mali.”

Msehli said some of the migrants were in very bad health and so were taken to hospitals by the IOM.

“The remaining migrants were taken to Al Maya detention centre,” she said.

Libya has become a key route for irregular migration to Europe in the chaotic years since the 2011 overthrow and killing of dictator Moamer Kadhafi in a NATO-backed uprising.

While many have drowned at sea, thousands have been intercepted by the Libyan coastguard, which has been backed by Italy and the EU, and returned to Libya.

The International Organization for Migration has said that nearly 2,000 migrants drowned or went missing in the Mediterranean in 2021, compared to 1,401 the previous year.

It is the world’s deadliest migration route, but people hoping to build a better life in Europe increasingly risk it.

Mali, which is currently under military rule, is chronically unstable and has been buffeted by internal challenges and regional jihadist forces.

Jihadists joined a regional insurgency in northern Mali in 2012, and then extended their campaign to the center of the country and neighbouring Burkina Faso and Niger.

Thousands of civilians have died, more than two million have fled their homes and economic damage to countries that are among the poorest in the world has been severe.

Read Next
US urges G20 to press Russia to reopen sea lanes for grain delivery
EDITORS' PICK
House energy committee chair Arroyo bats for cheap electricity
Ref admits to cheating: How Manny Pacquiao snagged the win
The vivo Y16 makes the season of giving more thoughtful for the whole family
Marcos urges Filipinos to be like Bonifacio: honest, patriotic
The Best Tech Gifts For The 2022 Holidays
18,529 out of 24,903 pass nursing board exam
MOST READ
Mel Tiangco on co-anchor Mike Enriquez’s condition, ‘rivalry’ with Korina Sanchez
LOOK: Vina Morales goes to Boracay with mystery man
LOOK: Arjo Atayde introduces Maine Mendoza to his Lola Rose
Marcos urges Filipinos to be like Bonifacio: honest, patriotic
Don't miss out on the latest news and information.