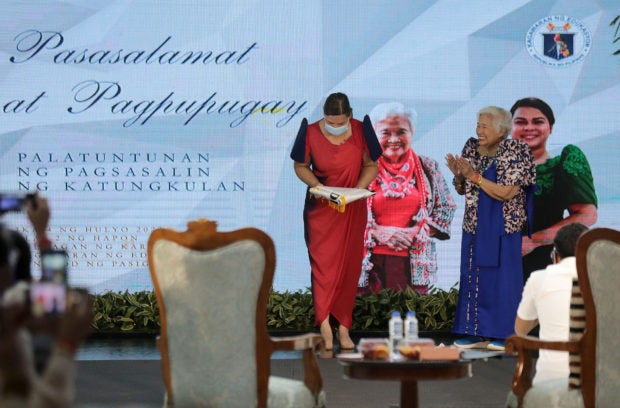 MANILA, Philippines — Like his predecessor, Socioeconomic Planning Secretary Arsenio Balisacan urged the Department of Education (DepEd) to resume in-person classes by August, lest the country’s future labor force end up lagging behind those of its neighbors.

“What’s the cost to our economy, to our society, to our children, to the human capital vis-à-vis the cost of that risk of infection? … And it’s clear that our hospitals show that we can manage the risk at this point. So there’s no reason why we should not open up the schools,” Balisacan said at a press briefing on Monday after the turnover ceremony with former National Economic and Development Authority (Neda) chief Karl Kendrick Chua.

“When they join the labor market five to 10 years from now, they will not be as competitive as our neighbors, who have already opened up, and provided better access to [education],” Balisacan said.

“This pandemic has been so inequitable; it has exacerbated the inequality of opportunities in education. So we should reduce and address that inequality,” he added.

Chua had also called for dismantling lingering restrictions on in-person classes, citing the state planning agency’s projections that a school year without physical classes would inflict P11 trillion in productivity losses across a 40-year period of one’s working life span.

In the country’s case, students had been under hybrid or mostly online classes in the past two years, which the World Bank said had likely aggravated “learning poverty.”

Balisacan was optimistic that with Vice President Sara Duterte at the helm of DepEd, the long-term scarring inflicted on the education sector by the prolonged COVID-19 pandemic would be addressed.

Duterte officially took over as education secretary from Leonor Briones on Monday in an exclusive, formal red carpet ceremony with both department officials and guests in Filipiniana attire.

A security lockdown at the DepEd’s Bulwagan ng Karunungan was imposed before the two-hour event that included “happy and joyous” performances by Manila Concert Choir and Philippine High School for the Arts, as requested by Briones.

In a virtual meeting with her successor and members of the Private Education Association before the turnover, Duterte said the education sector needed to “build back stronger and better” from the impact of the pandemic.

She emphasized the role of private schools in the resumption of in-person classes, saying she was eyeing “effective solutions” that would help institutions that suffered losses, mainly due to closures.

“Now that we are finally ready to open the doors to face-to-face classes, we need the help of our private schools in bringing our children and youth back to school,” Duterte said, adding that public schools have been burdened with the migration of students because of the pandemic.

On May 30, Briones announced the full implementation of in-person classes in all public schools for the next school year, tentatively scheduled to start on Aug. 22.

She clarified, however, that the setup would require the approval of the Inter-Agency Task Force for the Management of Emerging Infectious Diseases and local governments in areas where the schools were located.

Briones, who would be retained as DepEd consultant, said in her farewell speech that she was not “ashamed” or “embarrassed” to turn over “an institution that persevered in spite of the pandemic.”

She emphasized its accomplishments on her watch, including the Last Mile Schools Program and Alternative Learning System 2.0.

Duterte also praised Briones, calling her a force whose “light shone the brightest as a leader, an educator, and a Filipina who has a deep concern for the education sector and love of country.”

“Secretary Liling (Briones) and the whole DepEd organization never cowered in the face of disapproval, public frustration and pressure,” she said, adding that the department under her leadership would “continue to find ways to improve basic education in terms of access, equity, quality, resiliency and governance.”

For the largest teachers’ group, however, the “problematic” implementation of the distance learning program under Briones resulted in “massive learning loss.”

“Briones, together with former President Duterte, are the [culprits] of the massive learning loss we are currently facing for failing to provide the needs of the education sector,” the Alliance of Concerned Teachers (ACT) said in a statement.

“She should thank our teachers for taking the extra mile for looking for ways to deliver learning to learners as the DepEd failed to deliver sufficient and quality learning materials and providing remote learning resources to teachers and learners…,” it added.

The group reiterated its 10-point challenge to Duterte, saying that “game-changing” actions were needed to reverse the decline in the quality of education.

It dared her to double the education budget, currently standing at P788.5 billion under the 2022 General Appropriations Act; hire enough teachers to trim class size as part of the safe conduct of in-person classes; and provide learning resources like gadgets, textbooks and an internet allowance.

The group also pushed for the hiring of more education support staff to relieve teachers of administrative duties and the upgrading of their salaries and benefits.

At the same time, ACT supported the call for a review of the K-12 program as it also called for the reinstatement of the dedicated subject in Philippine history in high school “with [emphasis] on factual martial law education to counter historical distortion.”