Foreign arrivals in Boracay jump by 69% 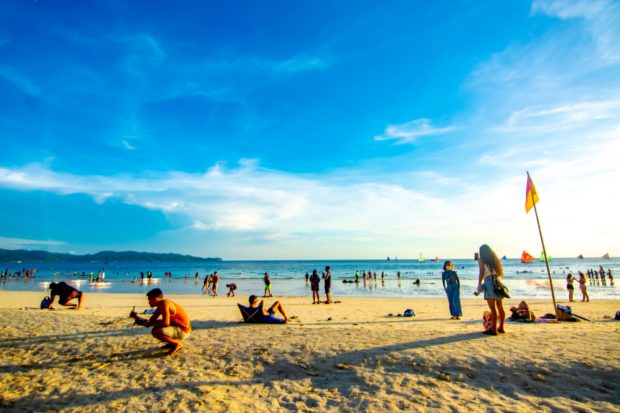 DESERTED NO MORE The white sand beach of Boracay, which was emptied of tourists at the height of the COVID-19 pandemic, is getting crowded again as leisure travelers return, as shown in this photo taken in June. Among the island’s recent guests are foreigners aboard direct flights from South Korea to the Aklan capital of Kalibo. —IAN PAUL CORDERO

Foreign tourists reached 6,873 last month, up from 4,268 in May, 4,737 in April, and 2,533 in March, according to a report of the municipal tourism office of Malay town in Aklan province where the island resort is located.

Direct chartered flights from Incheon, South Korea, to Kalibo International Airport, in the capital town of Kalibo, resumed on June 17 and June 22.

The percentage of foreign tourists to the total visitors also increased from 2.35 percent in May to 3.5 percent in June, the Malay tourism office said.

But the number was still significantly below prepandemic levels when foreign tourists comprised at least half of all visitors going to Boracay.

Domestic tourists continued to dominate the number of visitors in June, reaching 182,508, or 94.24 percent. Overseas Filipinos accounted for 4,269.

Among domestic tourists, nearly a third (59,650) were from Metro Manila, followed by 38,528 from Western Visayas and 33,656 from Calabarzon (Cavite, Laguna, Batangas, Rizal, and Quezon).

The Department of Tourism (DOT) in Western Visayas has accredited 342 accommodation establishments in Boracay as of June 27, up from 337 as of June 9, according to a Facebook post of the DOT regional office.