Strict liquor ban up in Davao City after student’s shooting 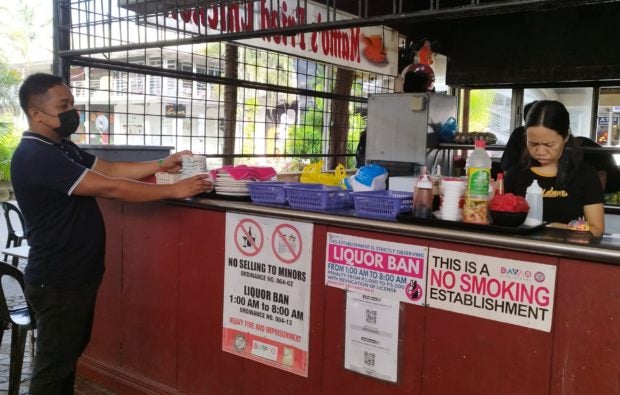 GETTING READY | Workers at a liquor store inside Matina Town Square in Taboan, Davao City, prepare for opening hours on Monday amid an order from Mayor Sebastian Duterte to strictly enforce the liquor ban from 1 a.m. to 8 a.m. (BARRY OHAYLAN)

DAVAO CITY, Davao del Sur, Philippines — Mayor Sebastian “Baste” Duterte on Monday ordered a strict enforcement of the ban on the sale and consumption of liquor in public business establishments and other public places from past midnight until 8 a.m., following the killing of a student by a police physician outside a bar here at dawn on Saturday.

“When people are intoxicated with alcohol, bad things will always happen,” said the mayor in his first media interview after he assumed office on June 30.

He said business establishments should only grant orders for liquor and other intoxicating drinks up to midnight. Doing so after midnight would mean they could face closure, he warned.

Dr. Marvin Rey Andrew Pepino, 31, a nonuniformed employee attending mainly to the medical examination needs of policemen and trainees at the Davao City Police Office (DCPO), was reportedly having an argument with Amir Mangacop, a 21-year-old student, that eventually resulted in an exchange of blows outside Lugar Bar on Camus Street here at past 1 a.m. on Saturday.

Police said Pepino had received several blows, prompting him to use his handgun to shoot Mangacop, who was unarmed. The student had six bullet wounds in different parts of his body.

City police spokesperson Maj. Ma. Theresita Gaspan said the DCPO had formed a special investigation body to look into the incident. But the police remained mum over what happened to Pepino after he was taken into custody. Reporters were barred from taking his photos in jail.

Gaspan said their investigation would also focus on why Pepino was able to bring a gun inside a bar, as even police officers were prohibited from bringing their firearms when they entered these establishments.

Before the shooting took place, a police team had arrived to respond to the call for help from the establishment but Pepino was still able to shoot the victim, Gaspan said.

Based on the official blotter of the responding San Pedro Police Station, a mobile police unit led by Police Cpl. Ropel Gersalino, arrived at the bar at 12:50 a.m. after the station was informed of the commotion.

Gersalino said he saw the heated altercation when he arrived, prompting him to pacify the two parties. He added in the blotter report that the police doctor was allegedly only defending himself when he shot the victim.

Witnesses brought Mangacop to Davao Doctors Hospital, where he was declared dead, while Pepino was brought to the police station.

The Scene of the Crime Operatives team recovered a .9-millimeter Glock 43 handgun and the six fired cartridges.

Duterte said there was a need to strengthen the ban to prevent such incidents from taking place again.

Davao City had implemented a strict liquor ban since April 2020 at the start of the pandemic, lifting it only in February this year, when COVID-19 cases in the city tapered down.

After lifting the total ban on liquor, Vice President Sara Duterte, who was then mayor of the city, still followed another city ordinance that imposed a ban on liquor but only at a specified time of the day, from 1 a.m. to 8 a.m.

Mayor Duterte said he would assess public reaction to the city laws and find ways on how they could be strictly implemented.

PRO 11 physician tagged in killing of student in Davao City