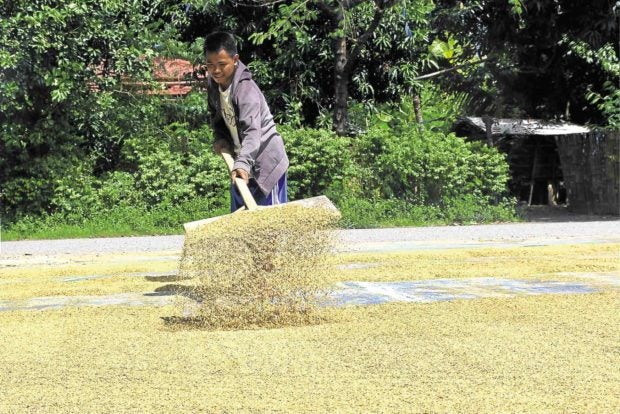 FILE PHOTO: A farmer in Lingayen, Pangasinan, dries his palay (unhusked rice) on pavement due to the lack of modern drying facilities in the province. WILLIE LOMIBAO

MANILA, Philippines —  In his first meeting as agriculture chief, President Ferdinand Marcos Jr. made his immediate priority clear: Sufficient food supply for the rest of the year.

Marcos Jr., who earlier said he would lead the agriculture department “for now”, stressed that the government must attend to the “impending food crisis” that may hound the country in the remaining two quarters of the year.

“When we look around the world, everyone is preparing for it. Therefore, we, because we are already in a disadvantageous position in terms of food supply, we should really pay very close attention to what we can do,” he said during the executive committee meeting.

Marcos Jr. said one immediate course of action is ensuring sufficient food supply, particularly rice and corn, in the country.

“The immediate one is rice, corn, food supply for the rest of the year, number one,” he said.

“So if there are some [executive order] again and some legislation you will need, even budget, supplementary budget from the House. Tingnan natin kung may makuha pa tayo,” he added.

According to Marcos Jr., there is a need to increase food production in the country while ensuring that food is affordable for the people.

“It is useless to have food if you cannot afford it anyway,” he said.

In the same meeting, Marcos Jr. likewise asked officials to give him a short memorandum regarding the advantages and disadvantages of the RCEP, which is a proposed pact among member states of the Association of Southeast Asian Nations and its free trade agreement partners.

He also asked about the assessment of the rice tariffication law in the country.

“Ano ba hiningi ko sa inyo, ‘yung sa rice tariffication law re-assessment of that? RCEP, give me a short memo on RCEP whether or not we should ratify. The pros and cons,” he said.

“[I]n the longer term, we really have to re-construct our value chain starting from our scientists and our researchers all the way to the Kadiwa store. So we have to remake that model,” he said.

“We have a good model that was from a previous administration but it is a very different world out there.  The technology is very different and although the concept will be very similar, we have to come out from 2022 to 2028 to 2030,” he added.