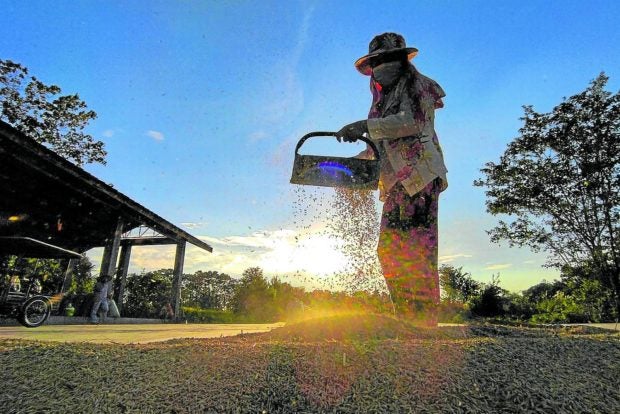 FILE PHOTO: During harvest season, rice farmers are usually up before daybreak to collect and store dried “palay” for hulling and milling. Farmers like this woman in Balungao, Pangasinan, now face a threat from imported agricultural products that will flow into the country under the new free trade pact among nations in the Asia-Pacific. RICHARD BALONGLONG

MANILA, Philippines — President-elect Ferdinand “Bongbong” Marcos Jr. has no issue about the Philippines joining the Regional Comprehensive Economic Partnership (RCEP), but that the agriculture sector should first be strong enough to compete with other countries.

During an interview with select media outfits on Thursday morning, Marcos said the RCEP deserves a second look because most nations that excelled in the past centuries relied on trading with other countries.

(In my opinion, let’s have another look at it, because the RCEP is a very… you know I am really a great proponent, believer, in trade.  We cannot progress, no country became rich without a good trading standing, as they had manufacturing, many exported goods, and they are very involved.)

“All the great economies in the past, what 200, 300 years? It really came down to trade. So that’s something we want to encourage and that is what RCEP seeks to do,” he added.

According to Marcos, the problem however is if the country’s agricultural industry is now ready for the opening of markets, which is a goal of the RCEP.

“Now, the only possible stumbling block there is that it’s all very well to trade if you’re in a competitive position and I do not know (if) that our agricultural sector is sufficiently robust to take on the competition that the opening of the markets will cause RCEP,” he said.

(So let’s have a look at it again and make sure na that our agricultural sector would not be at the losing end. If we ratify that, our systems should be ready to compete because if we cannot compete, they will be overtaken.)

The RCEP is a deal made by Asean member-states with free trade agreement partners like China, Japan, South Korea, Australia and New Zealand. It seeks to lower tariffs on imports — opening gates for more imported goods.

While the RCEP is seen to boost economies as trading between partners would go quickly and would be less expensive, some sectors are against the proposal as it may pave the way for more imported produce, which might kill the Philippines’ agricultural sector.

Marcos acknowledged that such is a valid concern and said he wants his administration not to be reliant on imports.

“Mawawala ‘yong ang ating mga local at panay ang lang import natin and we don’t want that.  We want to beef up the agriculture sector, we want to have sufficient food supply for the PH in case of any crisis, we should really learn our lessons from the pandemic that ‘wag natin pababayaan ‘yan dahil ‘pag may dumating krisis na ganyan ay ramdam na ramdam ng tao kulang ang pagkain for various reasons,” he said.

(Our local products would be lost and we would rely on imports, and we don’t want that.  We want to beef up the agriculture sector, we want to have sufficient food supply for the PH in case of any crisis, we should really learn our lessons from the pandemic that we should not turn a blind eye to that because when crises come, the people would really feel the hunger brought by various reasons.)

A paramount concern, he also said, should be the welfare of farmers.

“So anyway, sa RCEP, tingnan natin ulit exactly what will be the effect. Pag aralan natin na mabuti that if we ratify it now, what will be the effect on our farming community, our farmers especially?  They need protection, hirap na hirap ang mga magsasaka and how will it impact what our plans are to, as I mentioned earlier, create a value chain for agriculture once again,” he said.

(So anyway, with RCEP, let’s take a look at what exactly would be the effect. Let us study what would happen that if we ratify it now, what will be the effect on our farming community, our farmers especially?  They need protection, they are already struggling, and how will it impact what our plans are to, as I mentioned earlier, create a value chain for agriculture once again.)

(Let’s take a look at it properly, if our farmers can really take on that or if we need to support them, and if they can compete, then we ratify that.  But let’s protect our farmers.)

Several experts and economists have been on the lookout for the economic plans of the incoming administration.

Aside from the RCEP issue, Marcos has said he is not considering suspending fuel excise as there may be other ways to address the rising prices of petroleum products.