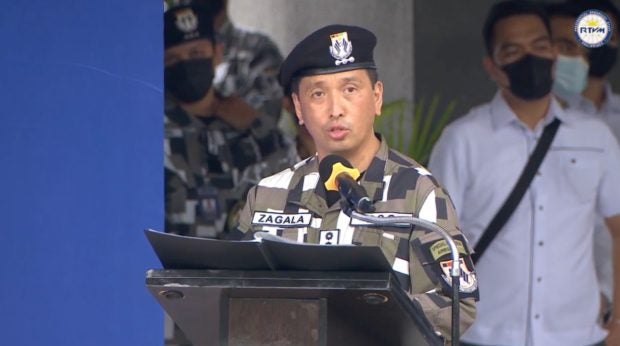 In his speech, Zagala stressed that among the PSG’s tasks is to ensure that Marcos is “always safe, secured, and protected” to “do his job well in bringing the promise of unity.”

“I would like to emphasize that protecting President Ferdinand Marcos Jr and his kin is not just simply protecting the chief executive and his loved ones, it is to secure the stability of our country,” Zagala said.

“It is to guarantee that the trust of the majority of our countrymen in his presidency will not be in vain. We are here because it is our mission, our duty, not simply because it was the order given to us, but more than that, we are here to play our role in nation-building—to take part in our country’s desire to be better than what we were before,” he added.

As PSG commander, Zagala said he intends to focus on training, personnel welfare, and stakeholder engagement.

“I intend to provide our troops with necessary regular training they need to do their duty to the best of their abilities,” he said.

“I believe that a well-trained, highly-skilled team will be the best defense and will be an effective deterrent against those that may want to do harm,” he added.

Marcos Jr., for his part, reminded them that the task of the PSG “goes beyond the stated mission of protecting the first family and foreign dignitaries who come to visit with us.”

“Because should you fail in your mission, that institution will collapse and the effects on our country will be dire. And that is why we only pick the best men and women that we have within our military to join the Presidential Security Group,” he added.