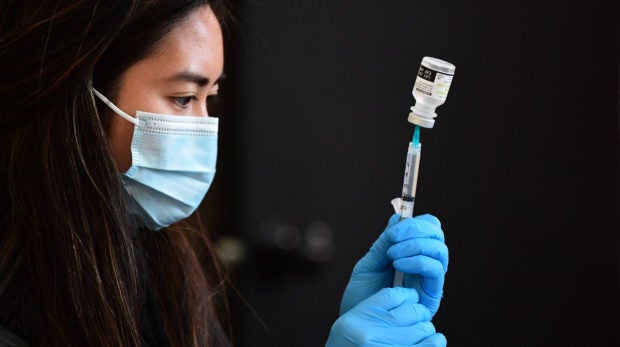 In this file photo taken on January 07, 2022 a Covid-19 vaccine is prepared for administration ahead of a free distribution of over the counter rapid Covid-19 test kits to people receiving their vaccines or boosters at Union Station in Los Angeles, California. AFP

WASHINGTON—More parents are questioning the necessity of routine vaccinations for young children. Adults are skipping shots as well, even for vaccines with a long safety record.

The trend comes amid a wave of misinformation and disinformation about Covid-19 and the vaccines that helped to stem pandemic deaths. Politicization of the Covid-19 shots has bolstered the anti-vaccine movement, contributing to the decline in routine immunizations for measles, polio and other dangerous diseases.

“They ask if these are truly necessary, or if we can give them at later times,” said Jason Terk, a Texas pediatrician and spokesperson for the American Academy of Pediatrics.

“This is not the majority of parents, but we are seeing a higher number.”

The anti-vaccine movement has mushroomed as its messages on social media are amplified by conservative political figures as well as foreign influence operations, whose vaccine disinformation efforts pre-date the pandemic.

With routine immunization rates falling, concerns are growing about a resurgence of diseases which had largely been eradicated in many parts of the world.

In the United States, the percentage of kindergarten children with recommended immunizations fell a percentage point to 94 percent in the 2020-21 school year, representing some 35,000 children unvaccinated.

“I refer to it as the parallel contagion,” Terk said. “This seems to have at its origin hesitancy in Covid-19 vaccinations and increasing distrust of vaccines and the bodies we’ve relied on to keep us healthy and well.”

Dramatic changes were seen in some states, especially during the height of the pandemic: researchers found a 47 percent drop in immunization rates in Texas among five-month-olds and a 58 percent decline for 16-month-olds between 2019 and 2020.

The researchers, writing in the scientific journal Vaccine, said the declines resulted from shelter-in-place restrictions and vaccine exemptions, but also to “an aggressive anti-vaccine movement in Texas.”

Washington state reported a 13 percent decline in childhood immunization rates in 2021 compared with pre-pandemic levels and Michigan’s vaccination rate for toddlers fell last year to 69.9 percent, the lowest in a decade.

Adult and adolescent inoculation rates have also dropped for vaccines protecting against diseases such as influenza, hepatitis, measles, tetanus and shingles, according to health consultancy Avalere, which analyzes insurer claims.

This has led to an estimated 37 million missed vaccination doses from January 2020 to July 2021 for adults and children ages seven and older, Avalere found.

Declines early in the pandemic can be attributed to shelter-in-place orders and social distancing, but “there is a risk of a bleed-over” of Covid vaccine misinformation, which affects other vaccines which have a longstanding safety record, noted Avalere managing director Jason Hall.

Social media have helped create a coalition that includes true anti-vaccine believers, libertarians and conservative political figures. These segments have been amplified by disinformation actors from Russia and elsewhere, said David Broniatowski, a George Washington University professor and associate director of the school’s Institute for Data, Democracy and Politics.

“People have been opposing vaccines for as long as there have been vaccines, but they’ve gotten more sophisticated over the past 10 years and a lot of that has been because of the ability to organize on social media across boundaries,” said Broniatowski, who researches vaccine disinformation.

He noted that while anti-vaccine activists, libertarians and foreign agents are not necessarily coordinating, “they have found common cause” in opposing vaccine mandates.

“One of the main changes we’ve seen is a pivot away from focusing on vaccines per se as a health issue to a civil rights and a political issue,” he added.

Conspiracy theories have surged during the pandemic, according to a 2021 YouGov poll, which found 28 percent of Americans and significant numbers in other countries say the truth about the harmful effects of vaccines is being “deliberately hidden.”

Broniatowski said that foreign disinformation agents “use vaccines as a wedge issue that can mobilize a segment of the population.”

A 2018 paper co-authored by Broniatowski in the American Journal of Public Health found anti-vaccine Twitter activity was amplified by Russian trolls from 2014 to 2017 as part of an effort to promote discord and undermine confidence in the health system.

Research from the Center for European Policy Analysis showed both China and Russia have promoted Covid-19 vaccine misinformation, in part to show that Western governments are incompetent and can’t be trusted.

“There’s been a concerted effort on the part of these actors to diminish the standing of science because it serves their political purposes,” Broniatowski said.

The problem is growing globally as well. A United Nations report last year found 23 million children worldwide missed out on routine immunizations in 2020. In the Americas region, the percentage of fully inoculated children fell to 82 percent from 91 percent in 2016 due to factors including funding shortfalls, vaccine misinformation and instability.

This is likely to create more health risks down the road from diseases which have been mostly contained.

“We had certain thresholds of protection to keep these diseases from being relevant from a public health point of view,” Terk said.

“The more people pushing back, the more likely we’ll have pockets of vulnerability.”

Over 24M fake content on COVID-19, vaccines removed by Meta from platforms