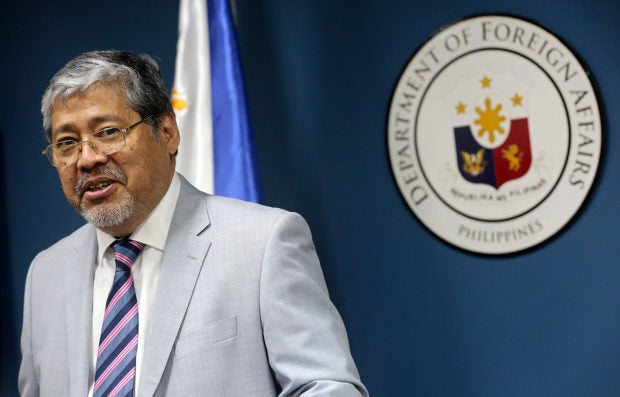 President Marcos has named career diplomat Enrique Manalo as his foreign secretary, a 43-year veteran who had represented Manila in the United Nations and in key missions in Europe, and who is seen ensuring continuity and consistency in the country’s foreign policy positions, especially on its maritime dispute with China.

Press Secretary Trixie Cruz-Angeles confirmed the appointment of Manalo, who took his oath before Mr. Marcos in Malacañang on Friday, the President’s second day in office.

The President has yet to name his secretaries for the health, environment, and science and technology departments.

Manalo, 69, served as Philippine permanent representative to the United Nations in New York under then President Rodrigo Duterte, a position he held from 2020 up to the end of Duterte’s term on Thursday.

He also served as acting foreign secretary from March 9, 2017 to May 17, 2017, after Duterte’s earlier appointment of Perfecto Yasay to the Department of Foreign Affairs (DFA) post was rejected by the Commission on Appointments. (Yasay died in 2020).

Under the Arroyo presidency, Manalo was the foreign undersecretary for policy. He had also served as the country’s ambassador to the United Kingdom, Ireland, Belgium and Luxembourg, and as head of mission to the European Union.

A graduate of the University of the Philippines (UP), where he earned a master’s degree in economics, he joined the DFA in 1979.

Signal to US, China

Manalo came from a family of diplomats. He is the son of the late writer-diplomat Armando Manalo and former Ambassador Rosario Manalo, who in 1959 became the first woman to pass the Philippine Foreign Service Officers’ Examinations.

“By appointing Manalo, (President Marcos) might be sending a signal of trying not to antagonize any of the major powers in the region, especially the United States and China,” according to retired political science professor Temario Rivera, adding:

“A veteran diplomat is more likely to appreciate the need to navigate difficult nuances and choices in geopolitics.”

Jay Batongbacal, director of the UP Institute for Maritime Affairs and Law of the Sea, said Manalo “can contribute to Philippine relations with US and China, including [on the issue of] the West Philippines Sea, by ensuring continuity and consistency in [the government’s] foreign policy positions and postures, and avoiding radical swings and uncertainty in the way the Philippines deals with other countries and international institutions.”

The professor described Manalo as “among the most senior and experienced (Filipino diplomats), so he is definitely fit for the job.”

The latest Marcos appointee, who is succeeding Teodoro Locsin Jr., would be “in a better position to ensure that DFA’s institutional policies and mechanisms take priority over arbitrary mood swings, and are conducted with appropriate professionalism and diplomatic finesse,” he said.

The Palace announced Manalo’s appointment a day after President Marcos had a meeting with China Vice President Wang Qishan, who represented Beijing at his June 30 inauguration.

In a speech on May 10, a day after the elections and as early poll results put him en route to a landslide victory, Mr. Marcos said he would continue Duterte’s independent foreign policy but that he was also seeing Philippine-Chinese relations “developing in many ways.”

Batongbacal said the biggest challenge for Manalo—and the Marcos administration—would still be China and “its continued pursuit of a foreign policy intended to bring ‘peripheral countries’ like the Philippines and other smaller Southeast Asian countries under its influence and dominance.”

The DFA, he said, would also need to maintain the country’s “strategic autonomy” and protect the national interest “amid increasing geopolitical competition in the region between China and Western powers in the economic and political sphere.”

It would have to know “how to manage the friction and tensions generated by China’s actions against external powers like the United States, Australia, Japan, European Union, etc., as it tries to establish regional dominance and push out the traditional external partners.”

The new DFA chief would also have to deal with a potential rise in crossborder and transboundary problems, such as smuggling and piracy, Batongbacal added. —With reports from Reuters AND Inquirer Research