The new President says building a modern aerial and surveillance capability is timely given the country’s territorial conflicts. He did not directly refer to China’s expansive maritime claims that include the West Philippine Sea.
By: Nestor Corrales - Reporter / @NCorralesINQ
Philippine Daily Inquirer / 05:50 AM July 02, 2022

CLARK FREEPORT—On his first full day on the job, President Marcos on Friday promised a robust and capable Air Force to defend the country’s sovereignty.

Speaking at the late afternoon rites to mark the 75th founding anniversary of the Philippine Air Force (PAF) inside the Haribon Hangar in this former US air base, Mr. Marcos said the ongoing defense modernization effort was essential for the country’s security.

He said it “would complement this administration’s vision for a stronger, bigger and effective Air Force capable of defending and maintaining our sovereign state, and of assisting our people in times of dire consequences and today’s reality that this dictates.”

“A more modern, aerial and surveillance capability is all the more felt given the territorial disputes that we in the Philippines are involved in,” Mr. Marcos said without mentioning China, which claims almost the entire South China Sea, including the West Philippine Sea.

This enhanced capability, he added, would be “very critical” in the Philippine military’s efforts to also protect the nation from communist insurgents and extremist groups. 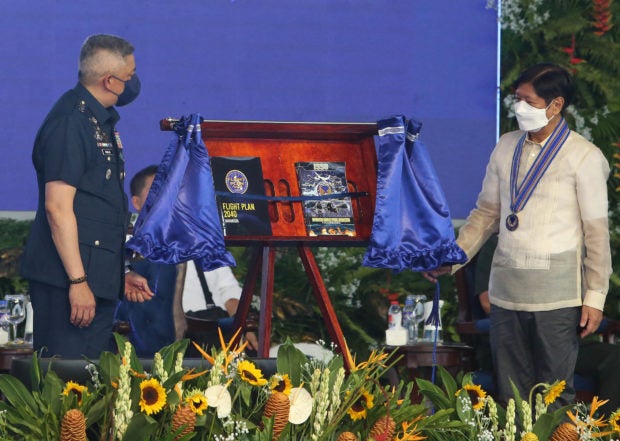 MODERNIZATION ON THEIR MINDS In one of his first events as Commander in Chief, President Marcos on Friday speaks at the 75th founding anniversary program of the Philippine Air Force (PAF) in Clark City, Pampanga, where he is also presented two documents—the PAF Flight Plan 2040 and the PAF Handbook—unveiled here with the Air Force chief, Lt. Gen. Connor Anthony Canlas. —MARIANNE BERMUDEZ

Mr. Marcos shared the stage with former President Gloria Macapagal-Arroyo, who is now a Pampanga provincial representative, and Special Assistant to the President Anton Lagdameo. Former defense secretaries Gilbert Teodoro and Benjamin Defensor were in the audience.

“Your loyalty and commitment and love of country are definitely worth emulation for not only those in the military but of all citizens of the Philippines,” he told the Air Force personnel.

Mr. Marcos made no reference to the crucial role played by reformist Air Force officers in the Edsa People Power Revolution that ended his father’s dictatorship 36 years ago.

Retired Lt. Gen. Antonio Sotelo, who was then an Air Force colonel, turned the tide in favor of rebel troops, who mutinied against Marcos Sr. and were backed by hundreds of thousands of civilians that massed on Edsa between Camp Crame and Camp Aguinaldo.

The elder Marcos had ordered Sotelo to disable the helicopters in the rebel-held Camp Crame, but no one among his men volunteered to carry out the attack.

Instead, Sotelo and the entire Air Force 15th Strike Wing which he commanded defected on the third day of the four-day revolt, in support of the rebel forces led by then Defense Minister Juan Ponce Enrile and then Vice Chief of Staff Fidel Ramos, who earlier broke away from the dictator.

Air Force commander Lt. Gen. Connor Anthony Canlas, who graduated from the Philippine Military Academy three years after the Edsa revolt, said it was “heartwarming and gratifying” that the President joined the anniversary celebration just a day after he was sworn into office.

“I assure you that we will continue to build on the culture of excellence and heroism that the airmen and airwomen before us have worked so hard to establish,” Canlas said.

A planned flyby to honor the occasion and the President was canceled due to the bad weather at Clark Freeport in Mabalacat City.

Canlas touted the more than P52 billion in assets that Mr. Marcos’ predecessor, Rodrigo Duterte, had acquired under the Second Horizon of the Revised Armed Forces of the Philippines Modernization Program.

The modernization program is currently on the last leg of its Second Horizon set from 2018 to 2022. The third and last horizon is set for 2023 to 2028 under the Marcos administration.

Some of the projects supposedly under Horizon 2 were pushed back to Horizon 3 due to budget constraints brought by the pandemic.

Billions of pesos worth of aircraft and equipment already paid for under Horizon 2 are scheduled for delivery in the coming years, including four radar systems, 32 additional Black Hawk helicopters and two lots of combat utility helicopters.

“These will make us more agile in controlling current and future security threats,” Canlas said.

Its reserve force also more than doubled to almost 34,000 from just 16,000 previously reported.

“Our eyes and ears in the skies are on-guard 24/7 to detect and deter external threats,” Canlas said.

In September last year, the PAF fighter jets intercepted an unidentified aircraft, believed to be Chinese, flying unauthorized inside the country’s airspace.

Canlas said the PAF would also continue to support other law enforcement agencies in their operations, including assaults on communist rebel forces.

The PAF would also continue to be the “first on the scene” during disasters and calamities by conducting rescue and relief operations, he said.

Earlier in the day, Mr. Marcos, Vice President Sara Duterte and members of the Cabinet started their first full day as leaders of the new administration with a Mass at the San Miguel Church inside the Malacañang complex.

The Mass was celebrated by Manila Archbishop Jose Cardinal Advincula.

He also held talks with Chinese Vice President Wang Qishan, who was a guest at his inauguration on Thursday, but Malacañang has yet to disclose details of their discussions. —With reports from Dexter Cabalza and Ana Roa, Inquirer Research