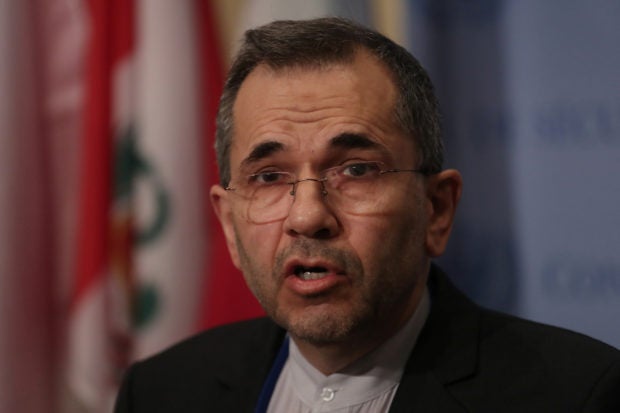 UNITED NATIONS — Senior Western officials voiced doubts about reviving the 2015 Iran nuclear deal on Thursday, with the European Union saying it “might not make it over the finishing line” and a US official saying the odds had lengthened after this week’s failed talks.

The U.N. Security Council met to discuss Iran one day after indirect U.S.-Iran talks ended in Doha with no sign of progress on resurrecting the pact under which Tehran limited its nuclear program in return for relief from U.S., U.N. and EU sanctions.

“I am concerned that we might not make it over the finishing line. My message is: Seize this opportunity to conclude the deal, based on the text that is on the table,” European Union Ambassador to the United Nations Olof Skoog said.

The EU coordinates the talks on resurrecting the agreement, which then U.S. President Donald Trump reneged on in 2018 and restored harsh U.S. sanctions on Iran, prompting Tehran to start violating its nuclear restrictions about a year later.

“The prospects for a deal after Doha are worse than they were before Doha and they will be getting worse by the day,” the senior U.S. official told Reuters on condition of anonymity.

The Security Council met to discuss the latest report by U.N. Secretary-General Antonio Guterres on the implementation of a 2015 council resolution that enshrines the nuclear deal, formally called the Joint Comprehensive Plan of Action (JCPOA).

U.S., British and French diplomats all placed the onus on Iran for the failure to revive the agreement after more than a year of negotiations.

Iran “should urgently take this deal – there will not be a better one,” Britain’s U.N. Ambassador Barbara Woodward said.

“Iran has yet to demonstrate any real urgency to conclude a deal, end the current nuclear crisis and achieve important sanctions lifting,” Richard Mills, Deputy U.S. Ambassador to the United Nations, told the meeting.

“Not only has Iran not taken up the offer on the table, but it also added yet more issues which fall outside the JCPOA with maximalist and unrealistic demands,” French U.N. Ambassador Nicolas de Riviere said.

Iran, however, described the latest talks as “serious and positive” and said it was ready to strike an agreement.

“Iran has demanded verifiable and objective guarantees from the U.S. that JCPOA will not be torpedoed again, that the U.S. will not violate its obligations again, and that sanctions will not be re-imposed under other pretexts or designations,” Iran’s U.N. Ambassador Majid Takht Ravanchi told the council.

The senior U.S. official disputed Tehran’s argument that Washington was to blame for the lack of progress, saying the United States had responded positively to proposed EU changes to the draft text of an agreement reached in wider talks in March while Iran had failed to respond to those proposals.

“Their vague demands, reopening of settled issues, and requests clearly unrelated to the JCPOA all suggests to us … that the real discussion that has to take place is (not) between Iran and the U.S. to resolve remaining differences. It is between Iran and Iran ,” the senior U.S. official said.

“At this point, we are not sure if they (the Iranians) know what more they want. They didn’t come to Doha with many specifics,” he added.

However, Chinese and Russian diplomats faulted the United States, with Beijing’s representative urging Washington to ease unilateral U.S. sanctions on Iran and Russia’s calling for all sides to show flexibility.