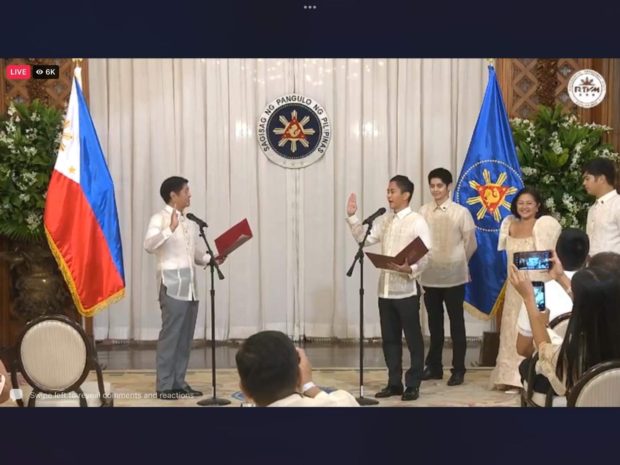 President Marcos administers the oath of office of his son, Sandro, as the district representative of their hometown and bailiwick Ilocos Norte. Screengrab from RTVM livestream

MANILA, Philippines — On his first day as Chief Executive, newly sworn President Ferdinand “Bongbong” Marcos Jr. on Thursday led the oath-taking of his son Sandro as congressman of Ilocos Norte, as well as other officials of the province of Ilocos Sur in Malacañang.

Before administering the oaths of office, Marcos revealed that it was his idea to hold the oath-taking ceremony in the Palace, saying he wanted to swear in his son.

“Kagagawan ko ito. This was my doing because I insisted that this is the only, this is a very important chance for me. When else will I be able to swear in, as president, our mayors, our congressmen, and our officials from Ilocos Norte?” he said, speaking before the officials.

(So I told Sandro ‘bring them all here, whatever it takes, so I can say that I swore in my son, who is now a congressman, and all officials of Ilocos Norte.)

Ilocos Norte is the Marcos family’s hometown and bailiwick.

President Marcos administers the oath of office of his son, Sandro, as the district representative of their hometown and bailiwick Ilocos Norte. @inquirerdotnet pic.twitter.com/bSob9d2EaL

Earlier, Marcos himself took his oath as president before Chief Justice Alexander Gesmundo at the National Museum. Before that, he went to Malacanang for a turnover ceremony with outgoing President Rodrigo Duterte.