Marcos has tremendous faith in Filipinos, says optimistic about the future 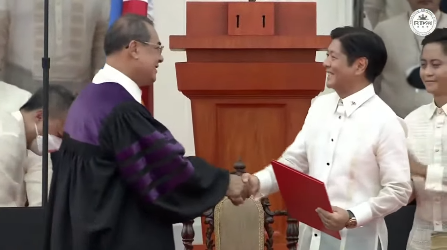 MANILA, Philippines — A major reason why the country’s future looks bright is the Filipino people, President Ferdinand “Bongbong” Marcos Jr. said Thursday, which is why he has tremendous faith in them.

In his inaugural speech, Marcos said that if he were asked why he thinks the Philippines is in for a better tomorrow, he would answer that he has 110 million reasons to show — referring to the country’s population.

“And if you ask me why I am so confident of the future, I will answer you simply that I have 110 million reasons to start with. Such is my faith in the Filipino,” the newly-inaugurated Chief Executive said towards the tail end of his speech before guests and supporters at the National Museum.

“Believe, have hope. The sun also rises like it did today and as it will tomorrow. And as surely as that, we will achieve the country, all Filipinos deserve,” he added.

Marcos also said in the early part of his message that he will not talk about the past, saying he will instead look towards the future of sufficiency. He said better plans to counter problems such as the COVID-19 pandemic and the economic crises would be forged by looking ahead.

“I am here not to talk about the past. I am here to tell you about our future. A future of sufficiency, even plenty of readily available ways and means to get done what needs doing – by you, by me. We do not look back, but ahead,” he said.

“Up the road that we must take to a place better than the one we lost in the pandemic. Gains made and lost. Opportunities missed. Well-laid plans superseded by the pandemic. Indeed, ours was the fastest growing economy in the ASEAN byways now outdated. We shall be again, by radical change in the way the world must now work to recover what we lost in that fire, and move on from there,” he added.

Marcos on Thursday took his oath before Supreme Court Chief Justice Alexander Gesmundo, marking the return of the Marcoses to power — 36 years since the tenure of his late father and namesake, former President Ferdinand Marcos.

Among the personalities present at the inauguration rites are members of Marcos’ family, including First Lady Liza Araneta, their children Congressman-elect Sandro Marcos and the President’s siblings, Senator Imee Marcos and Irene Marcos-Araneta.

The President’s mother — the Marcos family matriarch — former first lady Imelda Marcos, was also present during the inauguration. Former presidents Fidel Ramos, Joseph Estrada, and Gloria Macapagal-Arroyo also showed up and were seated in the middle of the stage.

Marcos won by a big margin in the 2022 presidential race, getting over 31 million votes, while his closest rival, former vice president Leni Robredo got 15 million votes.

Last May 25, both houses of Congress proclaimed Marcos and Duterte as winners of the 2022 polls.