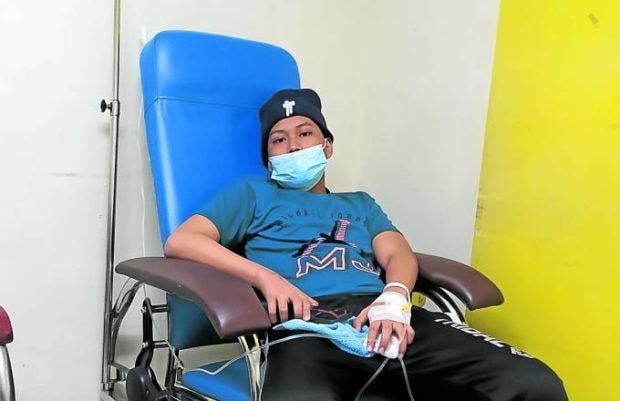 MANILA, Philippines — Playing basketball with his closest friends and biking have always been Juan Marco Aguilar’s favorite things to do in his past time.

While the pandemic temporarily halted him from doing outdoor activities, being diagnosed in December 2020 with acute lymphoblastic leukemia — a type of cancer in which the bone marrow makes too many immature white blood cells — has only further kept the 16-year-old indoors.

“Ever since he’s been diagnosed, he’s gotten quieter and more withdrawn,” his sister, Jenilyn Pamplona, told the Inquirer in an interview.

But whenever he opens up to her, he talks about wanting to go back to leading an active life and hanging out with his friends, she said, adding that her brother may be suffering from depression.

The teenager, who is in Grade 9, has just completed the second of a 12-cycle chemotherapy, each one costing P16,630.10, at the Philippine Children’s Medical Center.

He also undergoes laboratory tests regularly—a bone marrow test which costs almost P8,000 every six months and a complete blood test with a cost of over P200, once a month.

To meet Aguilar’s nutritional needs, a doctor had recommended an expensive brand of milk but Pamplona said all that they could afford was a cheaper brand.

Their father, a dishwasher who was laid off at the height of the pandemic, now plies a tricycle in their area. However, with the current and continuous rise of oil prices, the meager earnings he makes can sustain their family for only a day.

Their mother, Marlita, stays at home to look after Aguilar and his other siblings, two of whom are younger than him. Two older siblings who are employed have been helping pay for his medication and treatment but they also have their own families to feed.

Originally from Calauan, Laguna province, the teenager’s family has rented a place in Santolan, Pasig, to make it easier to bring him to the hospital for treatment.

Those who want to help Aguilar can deposit their donations in the Asia United Bank Corp. account of his sister, Jenilyn Pamplona, with account number 9161-0316-3824. Aguilar can be reached through Pamplona at 0968-2139564.