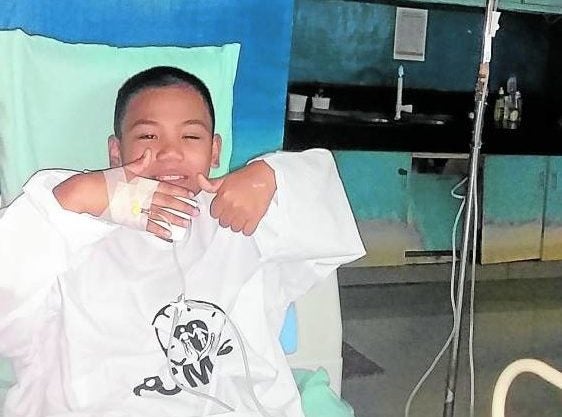 Earlshen Elon Relevante loves watching basketball games on TV and dreams one day of going to the United States to play for the Los Angeles Lakers like his idol, LeBron James.

But right now, the 9-year-old boy can’t engage in most physical activities, including basketball, after he suffered a relapse last year. Relevante was only age 4 when he was diagnosed with acute lymphocytic leukemia at Philippine Children’s Medical Center (PCMC) in Quezon City in November 2016.

Before that, he experienced a recurring fever, developed an ear infection while his skin turned yellowish, prompting his mother, Aileen, to bring him to a doctor.

Aileen told the Inquirer that she could not believe it at first when her son was diagnosed with leukemia. She said she had only heard of such cases before on TV and never thought it would happen to him.“My son was only 4 years old when he started chemotherapy. I thought that I would lose him because he was so thin. He couldn’t walk for months. He had to use a stroller. He was so weak,” she said.

Relevante’s condition put a halt to his studies although he returned to kindergarten school in 2019 after his condition improved after completing 14 cycles of chemotherapy at PCMC.

Last year, his doctor discovered that the cancer had returned and recommended that he undergo 14 cycles of chemotherapy again, with each one costing P179,751.25. On top of this, Aileen said they spend almost P1,000 for their fare every time she brings him to PCMC for treatment from their house in Binangonan, Rizal province.

Aileen said she had gone to several foundations, including the Department of Social Welfare and Development, to ask for help for their son’s treatment but the donations were often not enough.

Currently, she and her husband, Edward, resell items such as shirts and masks to pay for their expenses, after he lost his job as a construction worker during the pandemic.

Those who would like to help Relevante can deposit their donations in his mother’s account with China Bank Savings Inc. (not China Banking Corp.). Account name is Aileen Franco Relevante with account no. 617202035083. She can be contacted at 0951-6924211.