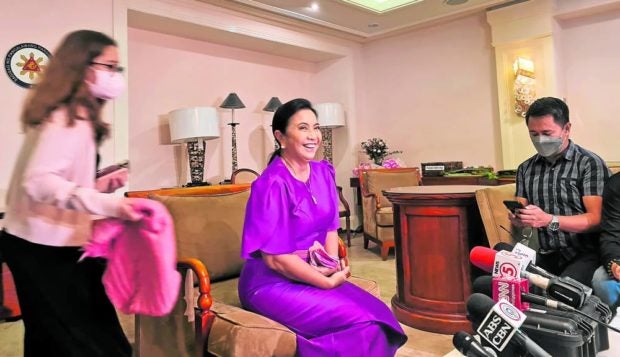 ‘NO REGRETS’ | Vice President Leni Robredo sits down with reporters on Wednesday, her last day in office, at the Quezon City Reception House. (Photo by KRIXIA SUBINGSUBING / Philippine Daily Inquirer)

MANILA, Philippines — Not a dry eye could be seen at the Quezon City Reception House on Wednesday as Vice President Leni Robredo vacated her office a day before her term ends.

Still, she expressed confidence that she was leaving the Office of the Vice President (OVP) — long viewed as a mere ceremonial office, a placeholder in the presidential line of succession—as an agency that can transform communities for the better.

“Of course, there were many times that we wished we were considered part of the government because we would have done so much more,” Robredo told reporters in her final interview as vice president. “But that is out of our hands now. Whatever we were given, no matter how meager it was, we were able to do our best.”

“I will always look back on those [things] that we thought were setbacks, but which were key to why the OVP became good at what it does,” she said.

At 9 a.m., the vice president’s official portrait was hung on a wall of the reception house, which is also where her successor, Sara Duterte, will hold office.

Spirits were still high as staffers and their family members took turns posing for photos with her.

The tears flowed when she stepped into her black vehicle shortly before noon. She waved goodbye as it made its way down the driveway, the members of her security detail standing at attention and executing a sharp salute.

Among other things, Robredo is leaving behind an office that, for four years in a row, received the highest rating from the Commission on Audit (COA) for good housekeeping.

Her team received the last COA report the night before they were all scheduled to leave, so “it was a fitting exclamation point on our six years here, because we really tried our hardest to make this office a model office.”

For six years, Robredo worked hard to transform the OVP into a more proactive office. Deprived of a position in the Cabinet, she implemented initiatives and programs targeting far-flung communities and marginalized sectors under her Angat Buhay program, and lobbied to expand the mandate of the OVP to be able to extend help to more Filipinos.

Work was not easy under a hostile administration that considered her recommendations and suggestions as insults to its governance. “There were really a lot of things we were not able to do because of the limitations,” Robredo said. “But if we’re talking about regrets, I have none. Every difficult decision I made turned out for the best.”

One difficult decision was accepting Malacañang’s offer for her to serve as drug czar back in 2018. “Even though we were only given 18 days, it was the best 18 days of our OVP life because we knew I could be sacked anytime. So we went all out, and at the end of the day, we were able to submit full-blown recommendations,” she said.

Her run for the presidency—historic for the massive “pink” movement it sparked across the country—was the happiest she ever was, Robredo said.

“Even though I did not win—and I have said this many times—if I had to do it over again, knowing what the results would be, I would still do it,” she said. “Because that was the happiest, most satisfying campaign I have ever been in.”

As she returns to private life, Robredo intends to continue fighting for her advocacies through her Angat Buhay Foundation, which is to be launched on July 1.She is excited about many things, such as being able to take the wheel and drive herself again and having the time to be herself again, including watching K-dramas and catching up on her growing pile of to-read books.

But there is a particular excitement about the foundation that, as its name declares, is intended to raise the quality of life of Filipinos in the margins.

She said work at the foundation would quell her fears that, being no longer in government, she might not be able to do anything relevant for the country: “Parang ‘yung excitement na ‘yun, siya ‘yung nagpapalit sa alinlangan na dahil wala na akong government position na panghahawakan, meron pa ba akong relevant na gagawin?”

She recalled her long experience as an NGO (nongovernment organization) worker and said it would not be a problem for her to go back to her former life—“sa dati kong buhay.”

According to Robredo, most of the members of the Angat Buhay OVP team will stay on board at the foundation, which is expected to focus on health and education initiatives.

She also promised to take a more active role in fighting disinformation.

“I want to help by bringing everyone to the same table so we can discuss how best to fight back against disinformation. We cannot continue in this same vein, where everyone has their own effort, because we cannot unravel the machinery that way,” Robredo said.

“If we continue to fail at this, our elections will always turn out this way: Those with the money and machinery will always win… If we do nothing, we will wake up one day and realize we have lost every single freedom we have fought for for a very long time,” she said.

Robredo: Rare force and flair of ‘a people’s campaign’