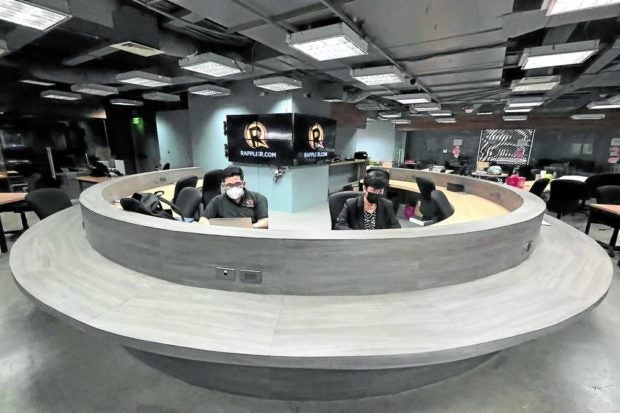 ‘NOT YET END OF THE WORLD’ | Inside the Rappler newsroom in Pasig City on Wednesday, when the company’s cofounder and Nobel laureate Maria Ressa announced in an international media conference in Hawaii that the Securities and Exchange Commission had affirmed its 2018 revocation order. (Photo by GRIG C. MONTEGRANDE / Philippine Daily Inquirer)

MANILA, Philippines — Lawmakers and media groups on Wednesday criticized the order of the Securities and Exchange Commission (SEC) to shut down online news outlet Rappler, calling it an assault on Philippine democracy and press freedom.

The SEC on Tuesday night reaffirmed the revocation of the certificates of incorporation of Rappler Inc. and Rappler Holdings Corp. (RHC) that allowed them to operate for breaching the foreign ownership rule on mass media companies.

Sen. Risa Hontiveros slammed the SEC order and took to task the outgoing Duterte administration for its continuing efforts to harass legitimate news sites and clamp down on press freedom.

“Silencing important media voices like Rappler, and ABS-CBN before it, not only affects the flow of information for the day. These assaults on independent press and other perceived ‘threats’ also chip away at our democracy,” she said.

“It is truly deplorable that this administration continues to find new ways of threatening legitimate news organizations not to exercise press freedom,” she added.

Hontiveros, a former media practitioner, lamented how the Duterte government was now showing a preference for vloggers and social media influencers, while “crushing” registered news outfits.

“While many registered news outfits are being crushed, unaccountable and insensitive vloggers and internet journalists have been given accreditation to cover the most important events in government. This only sows distrust and cultivates a tame coverage,” she said.

ACT Teachers party-list Rep. France Castro branded it a “digital martial law as the government continues to target the press, censor and control the information available to the public with the shutdown of ABS-CBN, the blocking of websites of progressive organizations and independent media and now with the SEC order to close Rappler.”

Castro condemned the attack against Rappler as a “serious threat against press freedom,” noting that “silencing the press, and shutting down media entities that report critical information to the people is boxing out the people and denying their right [to] have access to government transactions.”

Media groups called on the entire journalism community “to report about and to stand together against government moves to harass, restrict and silence any of us to keep the press free for all of us.”

The National Union of Journalists of the Philippines noted how “lawsuits and regulatory processes [are] used as tools to muzzle the press and these, as much as the touted infrastructure projects, form part of the Duterte legacy.”

Altermidya, the umbrella organization for alternative media outfits, said the SEC order “was both familiar and atrocious… the same tune played by the [National Telecommunications Commission].

It was the NTC that issued a cease-and-desist order against ABS-CBN on May 5, 2020, a day after the expiration of its congressional franchise. The NTC directed the network to halt television and radio broadcasting operations.

Rappler, co-founded by Nobel laureate and journalist Maria Ressa, on Wednesday vowed to “hold the line” and continue “business as usual” while they exhaust all legal remedies to avert the worst.

In a press briefing, Ressa, who is currently in Honolulu, Hawaii, where she was a guest speaker at the East-West International Media Conference, said: “Our goal is to continue holding the line. We’re not going to voluntarily give up our rights. And we really should continue to appeal them.”

Ressa broke the news about the SEC order during a speech at the conference, which discussed, among other things, the erosion of press freedoms across the world due to authoritarianism and disinformation.

Rappler legal counsel Francis Lim expressed confidence that the SEC order was “not the end of the world for us.”

Rappler can still go to the Court of Appeals (CA), which earlier upheld the original 2018 SEC revocation order, but remanded the case to the SEC to reevaluate the order as the involved foreign investor, Omidyar Network Fund, had donated on Feb. 28, 2018, the Philippine depositary receipts (PDRs) to Rappler to “cure” the defect found by the SEC.

However, the SEC decision dated June 28, signed by SEC Chair Emilio Aquino and the four other SEC commissioners, upheld its Jan. 11, 2018, judgment voiding the PDRs issued to Omidyar by Rappler and RHC for violating the foreign ownership rule.

“The Commission finds that the donation did not cure the violation by Rappler Inc. and Rappler Holdings Corp. of Article XVI Section 11(1) of the Constitution and PD (Presidential Decree) No. 1018, and hereby AFFIRMS the administrative penalties imposed in the Decision dated 11 January 2018 declaring VOID the (Omidyar) PDRs pursuant to Section 71.2 of the Securities Regulation Code and REVOKING the Certificates of Incorporation of Petitioners Rappler Inc. and Rappler Holdings Corp.,” read the order.

The Philippine Constitution mandates 100-percent Filipino ownership of mass media entities and the SEC said this was breached when Rappler sold PDRs to the philanthropic arm of eBay founder Pierre Omidyar in 2015.

PDRs are typical investment instruments that have been used by companies in restricted sectors to raise money from foreign investors without granting them actual ownership.

But the SEC argued that Rappler’s PDRs granted Omidyar a form of control since these required the Filipino stockholders of Rappler “to seek the approval of Omidyar on fundamental corporate matters.”

It was referring to the provision that stockholders must have prior discussion and approval of at least two-thirds of the PDR holders.

It said the revocation of Rappler and RHC’s certificates of incorporation would serve the public interest, adding that the Constitution and the laws of the land must be followed and could not be disregarded “to further business interests.”

“To rule otherwise would be to condone a blatant violation of the laws of the land, create a dangerous precedent, and worse, a ‘violate now, cure later’ culture where mass media entities who violate the nationality restriction provisions of the Constitution are effectively accorded a preferential treatment than those that have religiously complied with the same requirement,” the SEC said.

Should the CA again uphold this SEC ruling, Rappler can appeal before the Supreme Court.

Lim also clarified that staying open was not defying the SEC ruling as they still have recourse before the courts, and “until our courts of law say we have to close down by upholding the SEC ruling, it’s business as usual for us.”

“Based on our study, the SEC cannot enforce the decision pending appeal,” said Lim, former president of the Philippine Stock Exchange. “But if the SEC does that (shut them down), one clear legal remedy is to seek a temporary restraining order or a preliminary injunction with the CA.”