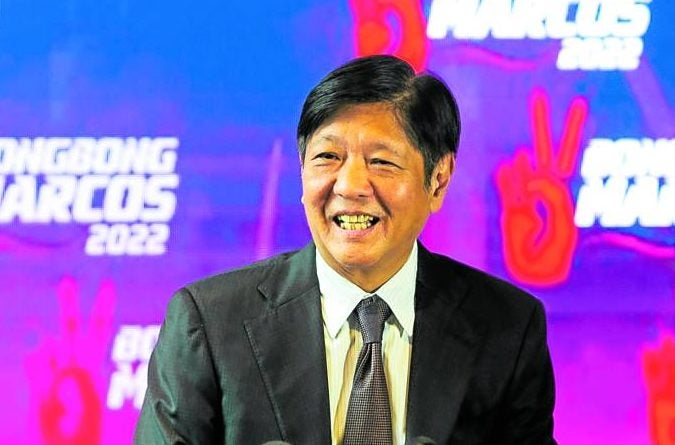 Now 64, he returns in triumph, exuberant with his massive election victory and appearing confident in taking the post his father held for 20 years.

Today, he leads his family back to Malacañang 36 years after the Edsa People Power Revolution and the 50th year since the declaration of martial law.

The son and namesake of the late  leader will take his oath as the country’s 17th President before Chief Justice Alexander Gesmundo at noon today, June 30.

He will swear an oath to the 1987 Constitution that was tailored partly to prevent a repeat of the dictatorship with a single six-year term for the president, among other provisions.

The former senator won the May 9 elections with 31.6 million votes, more than double the 15.03 million received by his main rival, Vice President Leni Robredo, who defeated him in a close race for the vice presidency in 2016.

Before his inauguration, Marcos will meet with President Duterte at Malacañang for a symbolic turnover of the helm of government, part of the departure honor ceremonies for the outgoing leader.

His formal inauguration at the National Museum will follow. Organizers said it would be a “solemn and simple ceremony” that will feature a civil-military parade.

His wife, Liza Araneta-Marcos, his sons Sandro, Simon, and Vincent, his mother, former first lady Imelda Marcos, his sisters Sen. Imee Marcos and Irene Marcos-Araneta, will witness another Marcos sworn in as the nation’s president.

Some members of Congress and the Supreme Court who voted to throw out all disqualification petitions against Marcos, and foreign diplomats were among those invited to the ceremony.

Marcos’ aides did not say what his inaugural speech would include, but the former senator had always harped on his “unity” message during the presidential campaign.

His incoming executive secretary Vic Rodriguez indicated that Marcos wanted to be his own person, quoting him as saying: “Judge me not by my ancestors, but by my actions.”

Franz Imperial, one of the heads of the inaugural preparation committee, said Marcos was advised on Wednesday to use a teleprompter “for the outline of his speech, to ensure sequencing and coherence.”

After the oathtaking, Marcos will host a vin d’honneur, or reception, in the same building before he heads back to Malacanang, for the arrival honors for the new president.

After that, he will lead the mass oathtaking of members of his Cabinet before leading their first meeting.

Marcos is expected to have separate meetings with Wang and US second gentleman Douglas Emhoff, the husband of Vice President Kamala Harris who will lead the seven-member delegation from Washington.

In the evening, there will be an inaugural dinner at Malacañang. At the same time, supporters of Marcos will stage a concert at Mendiola.

Marcos’ sister, Imee, downplayed the family’s supposed desire to “return” to Malacañang, saying it wasn’t the most important thing for the family.

“What’s most important to us is, of course, our name—the family name that has become so controversial, and so difficult at times to bear. The legacy of my father is what we hope will be clarified at last,” she told CNN Philippines in an interview on May 25, when her brother was proclaimed winner of the presidential elections.

Marcos said essentially the same thing in an interview in February with former ABS-CBN anchor Korina Sanchez who asked why he wanted to run for president.

He replied that he had no political or presidential ambitions and considered a career in the military.

“But when I returned (from exile), the political issue continues to be Marcos, the Marcos name, the Marcos family. So, I said … so that we can protect ourselves, I need to run. That’s why I ran for congressman,” he explained.

Marcos entered politics as a vice governor of Ilocos Norte in 1980 at age 23 and later became governor before the family was exiled in Hawaii in 1986.

After he returned to the country in 1991, he won a seat in Congress representing his home province of Ilocos Norte. He lost his first senatorial bid in 1995, and won it in 2010.

To this day, he said he was cheated of victory in the 2016 vice presidential election. The Supreme Court, acting as the Presidential Electoral Tribunal, ruled three times to reject his election protest against Robredo.

Jean Encinas Franco, who teaches political science at the University of the Philippines (UP), said Marcos’ victory meant that “31 million Filipinos are not bothered by this lack of accountability on the part of the Marcoses,” referring to the refusal by the family to apologize for the human rights violations during the dictatorship.

Filipinos “who are not part of the 31 million must never forget” the atrocities and the ill-gotten wealth amassed by the Marcos family, she said.

The Presidential Commission on Good Government has recovered about P172.4 billion in the family’s ill-gotten wealth as of 2020 and estimated that about P125 billion more are still to be recovered from the Marcoses.

Another UP professor, Maria Fe Villamejor-Mendoza, former dean of the National College of Public Administration and Governance, said that the “unimaginable happened” when another Marcos was elected to occupy Malacañang.

She said the millions of Filipinos who did not vote for Marcos should be wary and prevent any deletion of the dictator’s crimes from the national records, the people’s memory and the nation’s history.

“We just hope the institutions of the government will do their duties in solidarity with the Filipinos, not in unity with the wishes of Marcos Jr. But are we only dreaming?” she said.