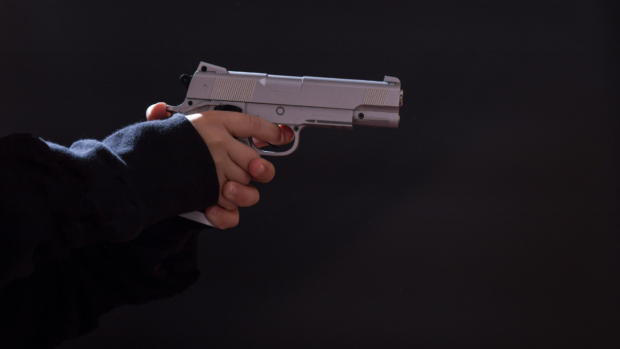 The tragedy — all too common in a country awash with firearms — took place in a motel where Randall, who has a criminal record that forbade him from owning a gun, met with his girlfriend.

He had brought his son, while his girlfriend had brought along her two-year-old twins and her one-year-old daughter.

At one point, Randall went out and left his weapon “in the closet,” said the sheriff during a press conference. Knowing where it was hidden, his son took it out and started playing with it while the girls’ mother was asleep.

“He pulls the gun from the holster, starts playing with it and fires a round into the one-year-old toddler, ultimately killing the one year old. The bullet then goes through and strikes one of the two year old toddlers who’s injured but is expected to recover.”

When the father returned, he took the gun and an unidentified substance that may have been drugs, out of the room before the police arrived.

The baby girl’s death is the latest in a staggering series of similar accidents.

“Every year, hundreds of children in the United States gain access to unsecured, loaded guns in closets and nightstand drawers, in backpacks and purses, or just left out,” according to a recent report by Everytown For Gun Safety.

“With tragic regularity, children find these unsecured guns and unintentionally shoot themself or someone else.”

The organization, which advocates for increased regulation of firearms, estimates that these “unintentional shootings” by minors cause an average of 350 deaths each year.

More generally, firearms cause approximately 40,000 deaths a year in the United States, including suicides, according to the Gun Violence Archive website.