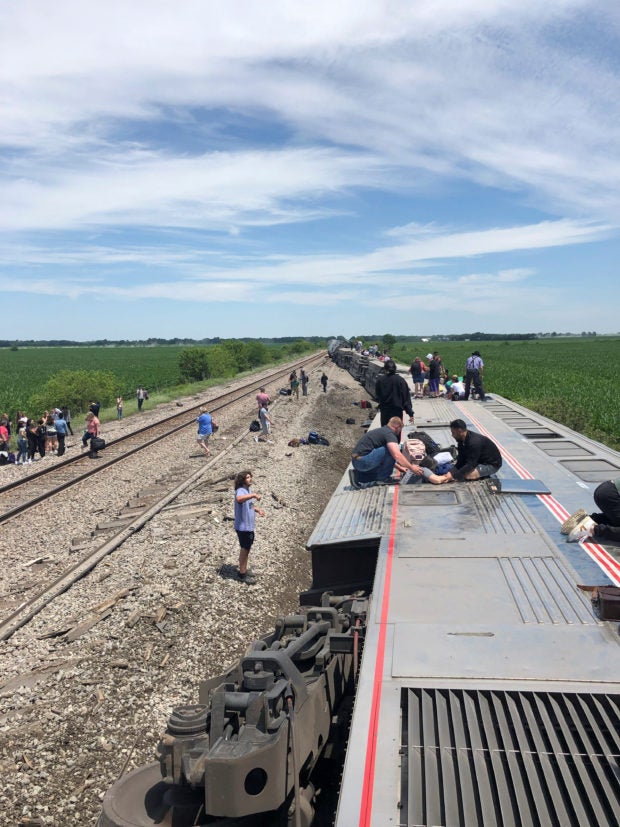 People exit from an Amtrak train that derailed after hitting a dump truck at an uncontrolled crossing, near Mendon, Missouri, U.S., June 27, 2022 in this picture obtained from social media. Dax McDonald/via REUTERS THIS IMAGE HAS BEEN SUPPLIED BY A THIRD PARTY. MANDATORY CREDIT.

A fourth person has died after an Amtrak train carrying about 275 passengers and a dozen crew hit a dump truck at a railroad crossing on Monday and derailed, the Missouri State Highway Patrol said on Tuesday.

The fourth victim was a passenger aboard the train, which was traveling from Los Angeles to Chicago when it collided with a dump truck near Mendon, Missouri, about 100 miles (160 km) northeast of Kansas City, Missouri. Two other passengers and the truck driver were also killed in the collision.

Eight cars and two locomotives derailed, Amtrak officials said, leaving all but one car lying on its side along the track surrounded by grass and farmland. Passengers evacuated the wreck through windows facing skyward.

A Missouri State Highway Patrol spokesman said the collision occurred at an uncontrolled crossing without lights or signals.

About 150 people were transported from the scene to 10 area hospitals with injuries that ranged from minor to severe, the patrol said on Tuesday.

A team of 16 investigators from the U.S. National Transportation Safety Board (NTSB) were on scene at the crash site Tuesday and launched an investigation.

The speed limit for the train was 90 mph along that stretch of track, Jennifer Homendy, the NTSB chair, said at a press conference Tuesday afternoon. But investigators have not yet determined the speed of the train, when its horn was blown and whether emergency brakes were deployed.

Homendy said that the train traveling at the posted speed could take a mile or more to stop.

“Our mission is to determine what happened, why it happened and to prevent a reoccurrence of this in the future.”

Three dead in Amtrak train crash and derailment in Missouri