Three dead in Amtrak train crash and derailment in Missouri 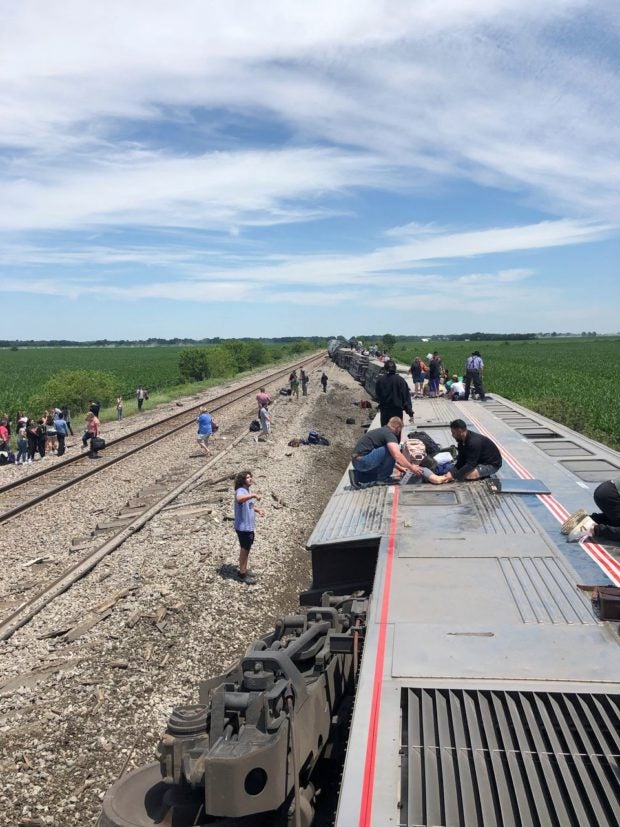 People exit from an Amtrak train that derailed after hitting a dump truck at an uncontrolled crossing, near Mendon, Missouri, U.S., June 27, 2022 in this picture obtained from social media. Dax McDonald/via REUTERS

An Amtrak train carrying more than 200 passengers derailed in northern Missouri on Monday after hitting a dump truck at an uncontrolled crossing, killing two aboard and a person in the truck, and injuring at least 50, officials said.

Eight cars and two locomotives derailed, Amtrak said, leaving all but one car lying on its side along the track surrounded by grass and farmland. Passengers evacuated the wreck through windows facing skyward, social media images showed, as dozens of rescue vehicles and some helicopters soon converged on the scene.

Rescuers used ladders to reach people perched atop the train. A vehicle axle was among the debris strewn along the track.

The train with 243 passengers and a dozen crew on board hit the vehicle near Mendon, Missouri, at 1:42 p.m. ET (1742 GMT) as it traveled eastbound from Los Angeles to Chicago, Amtrak, the U.S. national passenger carrier, said.

Missouri State Highway Patrol spokesman Justin Dunn confirmed the deaths at a news conference. He said the collision occurred at an uncontrolled crossing without lights or signals.

Mendon is in a rural area about 100 miles (160 km) northeast of Kansas City, Missouri.

A team of 16 investigators from the U.S. National Transportation Safety Board (NTSB) was due at the crash site early Tuesday morning to begin an investigation that will block service on that line for several days, NTSB Chair Jennifer Homendy told reporters. 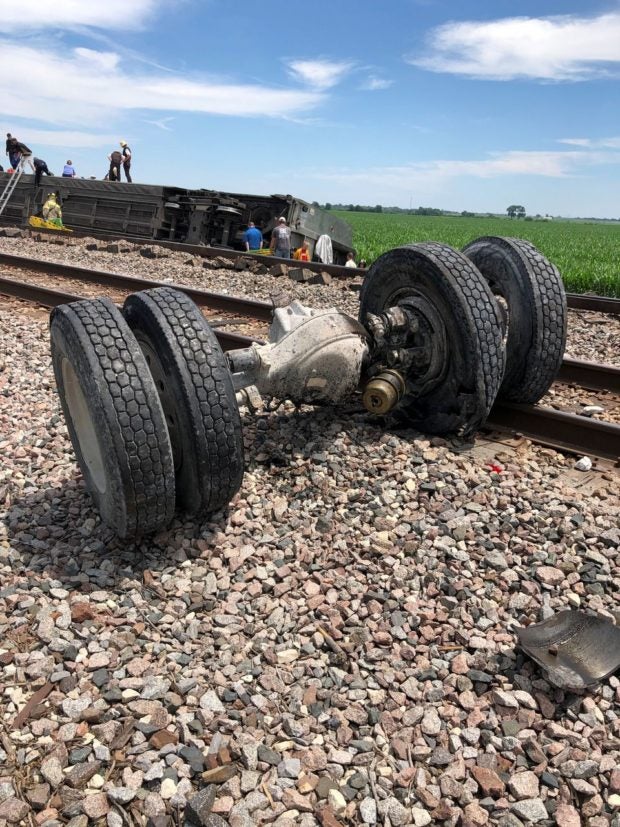 A view of an overturned locomotive following an Amtrak train derailment after it hit a dump truck at an uncontrolled crossing, near Mendon, Missouri, U.S., June 27, 2022 in this picture obtained from social media. Dax McDonald/via REUTERS

An unprotected crossing normally would have stop signs and cross blocks, Homendy said, saying she wanted to inspect the scene to determine what safety signals were in place.

Passenger Robert Nightingale told CNN he had been dozing off when the train derailed.

“I could feel the tracks go back and forth, back and forth, and then it started to go, to tumble on my side of the road,” Nightingale said from a school where passengers were taken.

“There were ambulances all over. They were bringing stretchers to the train, and now there are stretchers here at the school,” he said.

US passenger railroad Amtrak to increase trains as demand returns

Three die, some injured as Amtrak train derails in Montana