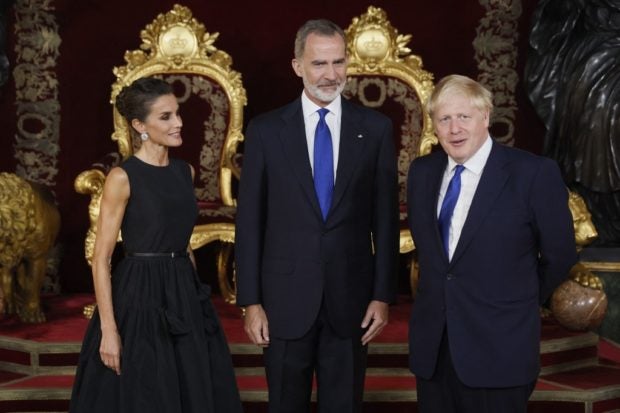 Madrid, Spain — British Prime Minister Boris Johnson will urge his NATO allies at a summit in Madrid to boost their defense spending in response to Russia’s invasion of Ukraine, his office said Tuesday.

After Russia annexed Crimea in 2014, NATO member states pledged to spend at least 2.0 percent of their gross domestic product on defense to ensure the readiness of the alliance by 2024.

Only eight of NATO’s 30 members met or surpassed this target in 2021, but a number of nations such as Germany and Italy have boosted their defense spending this year due to the war in Ukraine.

“We need allies –- all allies –- to dig deep to restore deterrence and ensure defense in the decade ahead,” Johnson will tell the NATO summit in Madrid on Wednesday, his office said in a statement.

“The two percent was always meant to be a floor, not a ceiling and allies must continue to step up in this time of crisis,” he will add.

On the flight to Madrid, the British prime minister said there needs to be “a conversation within NATO” about a new target for defense investment after 2024.

NATO “must adapt to meet new and increased threats” with “long-term investment” as well as a readiness “to surge defense spending to adapt to crises and urgent needs,” the British government said in a statement.

Johnson will also announce at the summit that Britain will boost its military presence in Estonia, a tiny nation bordering Russia, with more powerful weapons and air defense.

Johnson, however, is criticized by the opposition and some lawmakers of his own party for reneging on his election promise to increase military spending in 2022 beyond the rate of inflation, which is expected to hit over 10 percent this year.

His Defense Secretary Ben Wallace has lobbied for the defense budget to be raised to 2.5 percent of Britain’s economic output by 2028, according to British press reports.