P62M worth of marijuana plants burn down in Kalinga 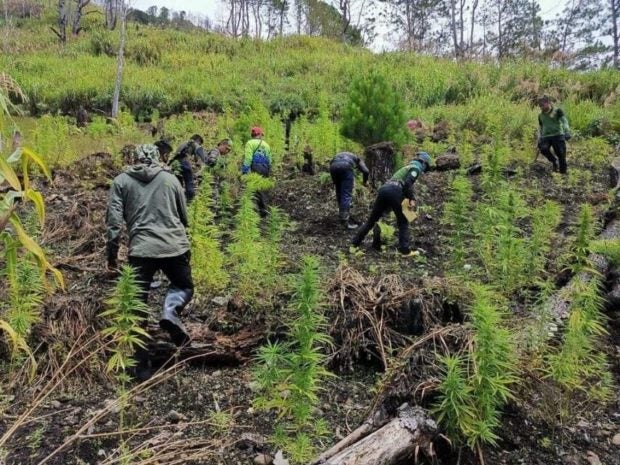 PDEA agents uproot marijuana plants from a plantation in Kalinga. (Photo from PDEA).

MANILA, Philippines — A total of P62 million worth of full-grown marijuana plants have been seized and burned down in Kalinga, Benguet province by police operatives over the weekend.

In a statement on Monday, Philippine National Police (PNP) officer-in-charge Lt. Gen. Vicente Danao Jr. said that about 310,100 fully-grown marijuana plants valued at P62,000,000 were uprooted during the three-day operation in four separate barangays in Kalinga from June 24 to June 26.

The marijuana plantation sites, which have a combined land area of 25,950 square meters, were found in barangays Buscalan, Butbut Proper, and Loccong, Tinglaya.

No suspect or cultivator was arrested during the operations, Danao said.

The operations were conducted by the Philippine Drug Enforcement Agency, Tinglayan Municipal Police, and various anti-drug operatives of the local police.

“Let me again commend our PNP and PDEA operatives for their unwavering efforts in the massive eradication of cannabis plantations in the mountainous areas of Kalinga. Let us further intensify all efforts to hunt down all those responsible behind the planting and cultivation of these prohibited plants,” Danao said.