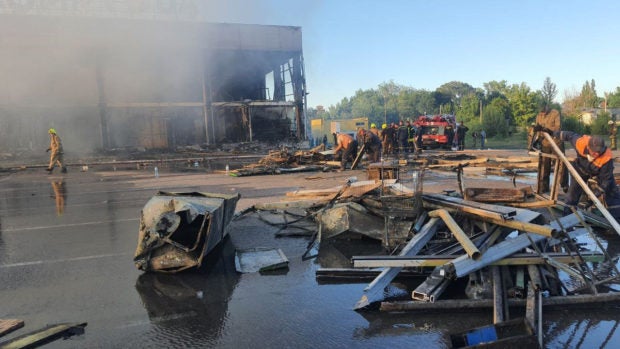 This handout picture taken and released by the Ukraine’s State Emergency Service on June 27, 2022 shows rescuers working in a mall hit by a Russian missile strike in the eastern Ukrainian city of Kremenchuk. AFP

Ukraine’s President Volodymyr Zelensky urges leaders of the Group of Seven industrialized countries to do their utmost to end Russia’s invasion of his country by the end of the year.

He also calls on the G7 “not to lower the pressure and to keep sanctioning Russia massively and heavily”, a G7 source says. He says on Telegram he asked for an oil price cap to limit Russia’s energy revenues.

He says it is too early to open negotiations with Russia, as Kyiv is still seeking to consolidate its positions, the French presidency says.

The G7 vows solidarity with Ukraine “for as long as it takes”, in a statement issued after Zelensky’s video address.

The G7 also tells Russia it must allow grain shipments to leave Ukraine to avoid worsening a global food crisis.

It tells Moscow it must allow Ukrainians taken to Russia against their will to return home at once.

And it expresses “serious concern” over Russia’s plans to deliver missiles capable of carrying nuclear warheads to Belarus in the coming months.

US National Security Advisor Jake Sullivan speaks on the sidelines of the summit of a “consensus emerging” in the G7 on a plan to cap prices for Russian oil.

The White House also unveils new measures to hamper Russia’s ability to resupply the weaponry used in its onslaught against Ukraine.

The G7 also plans to turn funds raised in recently imposed trade tariffs on Russian exports into assistance for Ukraine.

“The occupiers fired missiles at a shopping centre where there were over a thousand civilians. The mall is on fire, rescuers are fighting the fire. The number of victims is impossible to imagine,” he writes on Telegram.

Nato will boost its high readiness forces to “well over 300,000” troops at its Madrid summit starting Tuesday, as they strengthen their defences in response to Russia’s war on Ukraine, alliance chief Jens Stoltenberg says.

“This constitutes the biggest overhaul of our collective defence and deterrence since the Cold War,” Stoltenberg says.

US anti-aircraft missiles for Ukraine

Zelensky has pleaded for more powerful defences against Russian air attacks since the invasion started in February.

Two of Russia’s debt payments have been prevented from reaching creditors due to sanctions over the Ukraine offensive, the Moscow finance ministry says, as the country approaches its first foreign default in a century.

Western economic sanctions have largely severed Russia from the international financial system, making it difficult for Moscow to service its debt.

Indonesia — which holds the group’s rotating presidency this year — caused controversy by inviting Russia to the gathering of the world’s major economies.

European Commission chief Ursula von der Leyen said on Sunday she does not rule out sitting at the same table with Putin at the G20.

“It is also important to tell him to his face what we think of him,” she said.