Ghislaine Maxwell put on suicide watch ahead of sentencing—lawyer 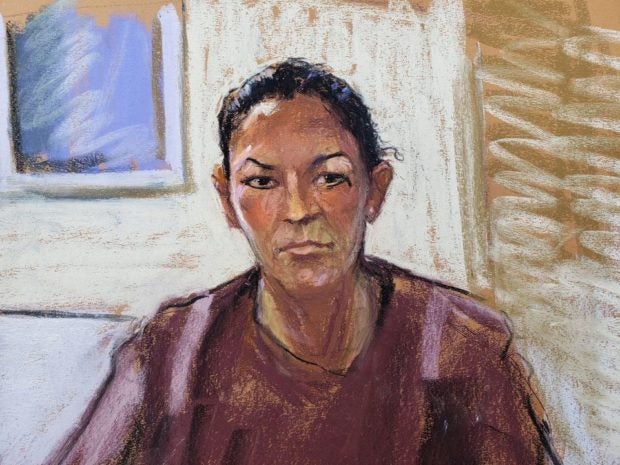 NEW YORK — Jailed former socialite Ghislaine Maxwell has been placed on suicide watch — despite not being suicidal — according to her lawyers, who said they would move to postpone her sentencing for sex trafficking if she remained in isolation.

She has been denied access to legal documents and time to meet with lawyers and this has “prevented her from preparing for sentencing,” which is set for Tuesday, he added.

Maxwell, who was convicted in New York federal court for helping the late financier Jeffrey Epstein sexually abuse girls, was placed on suicide watch without a psychological evaluation “and without justification,” Sternheim said.

A psychologist evaluated the 60-year-old on Saturday and “determined she is not suicidal,” he added.

If Maxwell remains on suicide watch, her lawyers will move on Monday to postpone her sentencing, Sternheim said.

The Oxford-educated daughter of the late British press baron Robert Maxwell was convicted late last year on five of six sexual abuse counts, the most serious for sex trafficking minors, and her sentence could amount to an effective life term behind bars.

Prosecutors have asked that Maxwell receive between 30 and 55 years in jail.

Her lawyers have called on Nathan to hand down a sentence less than the US probation office’s recommended 20 years, citing a traumatic childhood and claiming that Maxwell is being unfairly punished because Epstein escaped trial.

Epstein killed himself in 2019 while awaiting his own sex crimes trial in New York.

Maxwell has already been held in detention for some two years following her arrest in New Hampshire in the summer of 2020.

Accuser testified, ‘My soul is broken’ because of Ghislaine Maxwell

Read Next
Afghan quake survivors without food and shelter as aid trickles in
EDITORS' PICK
vivo brings to the Philippines a powerful smartphone with a slimmer body, the vivo Y02s for only PHP 6,499
Palace: Biggest supermarkets in PH commit to sell sugar at P70 per kilo
What to watch out for when selecting a video surveillance solution
Heads may roll at BOC, says Palace if sugar smugglers are allowed to use recycled import permits
House energy committee chair Arroyo bats for cheap electricity
DOH reports increase in daily COVID-19 deaths, mostly unvaxxed
MOST READ
Metro Manila’s No. 1 wanted man arrested, says NCRPO
DepEd to give teachers P5K cash allowance within first week of classes
Jordan Clarkson arrives in Manila to bolster Gilas Pilipinas
Brian Poe-Llamanzares receives his PhD in Public Administration
Don't miss out on the latest news and information.