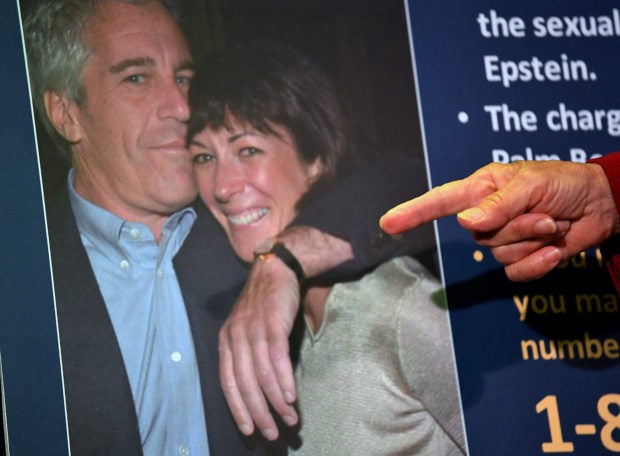 In this file photo taken on July 02, 2020 acting US Attorney for the Southern District of New York, Audrey Strauss, announces charges against Ghislaine Maxwell during a press conference in New York City.  British socialite Maxwell was found guilty of sex crimes on December, 29, 2021 including the most serious charge of sex trafficking a minor. (Photo by Johannes EISELE / AFP)

Maxwell was convicted by a 12-person jury of five of the six counts she was facing including the most serious charge of sex trafficking a minor.

The 60-year-old daughter of the late British press baron Robert Maxwell could potentially spend the rest of her life behind bars.

Sex trafficking of minors carries a maximum 40-year sentence. The lesser charges have terms of five or 10 years.

Maxwell sat passively in the Manhattan courtroom, slowly removing her mask to take sips of water, as Judge Alison Nathan read out the verdicts for each of the counts.

Nathan offered her “sincere thanks” to the jury for their service, adding that they served with “diligence.”

The jury deliberated for five full days before coming back with a verdict in the high-profile case.

After the verdict was read, Nathan adjourned the proceedings and Maxwell walked out of the courtroom into detention as she has done every day of the month-long trial.

No date was set for her sentencing.

Two of Epstein’s alleged victims said they were as young as 14 when Maxwell allegedly began grooming them and arranging for them to give massages to Epstein that ended in sexual activity.

One, identified only as “Jane,” detailed how Maxwell recruited her at summer camp and made her feel “special.”

Another, going by “Carolyn,” said she was usually paid $300 after sexual encounters with Epstein, often by Maxwell herself.

A third alleged victim was Annie Farmer, now 42, who said Maxwell fondled her breasts when she was a teenager at the New Mexico ranch owned by Epstein.

Epstein, 66, killed himself in jail in 2019 while awaiting his own sex crimes trial. Maxwell was arrested the following year.

Maxwell had pleaded not guilty to all counts. The prosecution portrayed her as a “sophisticated predator who knew exactly what she was doing.”

Prosecutor Alison Moe said Maxwell was “the key” to Epstein’s scheme of enticing young girls to give him massages, during which he would sexually abuse them.

Maxwell’s defense team countered that there was a “lack of evidence” to convict and questioned the accusers’ ability to recollect quarter-century-old events.

The team also argued that Maxwell was being used as a “scapegoat” for Epstein’s crimes after he evaded justice.

Maxwell declined to take the stand during the trial but made a brief statement to the judge.

“Your honor, the government has not proven its case beyond reasonable doubt so there is no need for me to testify,” she said.