Lacson to rookie senators: Be humble, modest, do your research 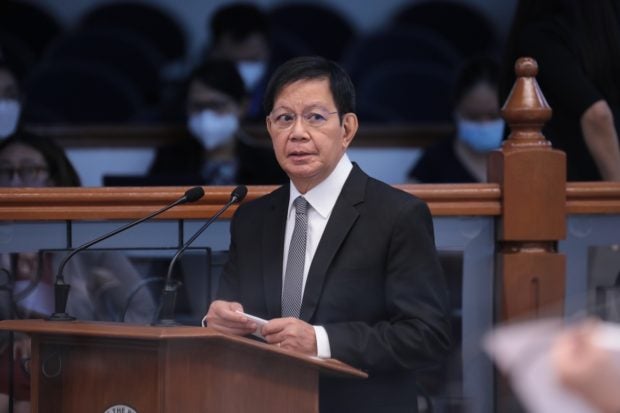 MANILA, Philippines — Outgoing Senator Panfilo “Ping” Lacson on Monday advised rookie senators to be humble, modest and do their research.

Lacson, who was first elected to the Senate in 2001, stressed the need for the new senators to be humble in pushing for their respective advocacies and to “learn the art of legislation.”

(Humility is a virtue. If you are a new senator, be humble, be modest and try to learn the art of legislation because it is not that simple.)

Lacson also recalled the advice he was given by veteran senators when he first stepped foot in the upper chamber 21 years ago.

(The advice to us was ‘don’t take the floor immediately, get a feel of it first, observe, don’t be too eager to take the floor or you may get humiliated because you should first learn the ropes, so to speak.’)

(Our advice to us was at least four months, sit down, watch, listen, don’t interpellate or deliver a privilege speech yet.)

Lacson likewise underscored the importance of research—both for new senators and members of the Senate minority bloc.

When asked if this was his advice to new senators, Lacson said: “Yeah, to all.”

(Even those who entered the Senate before, those elected in 2019, have not been in the Senate that long, there is still a need to study.)

Lacson is among eight outgoing senators from the 18th Congress whose term will end on June 30.

Lacson, a former chief of the Philippine National Police, was also one of 10 contenders for president in the May 2022 elections.

Read Next
Masbate barangay kagawad shot dead
EDITORS' PICK
vivo brings to the Philippines a powerful smartphone with a slimmer body, the vivo Y02s for only PHP 6,499
Palace: Biggest supermarkets in PH commit to sell sugar at P70 per kilo
What to watch out for when selecting a video surveillance solution
Heads may roll at BOC, says Palace if sugar smugglers are allowed to use recycled import permits
House energy committee chair Arroyo bats for cheap electricity
DOH reports increase in daily COVID-19 deaths, mostly unvaxxed
MOST READ
Brian Poe-Llamanzares receives his PhD in Public Administration
Metro Manila’s No. 1 wanted man arrested, says NCRPO
Alyssa Valdez to miss Creamline’s AVC Cup campaign
DepEd to give teachers P5K cash allowance within first week of classes
Don't miss out on the latest news and information.