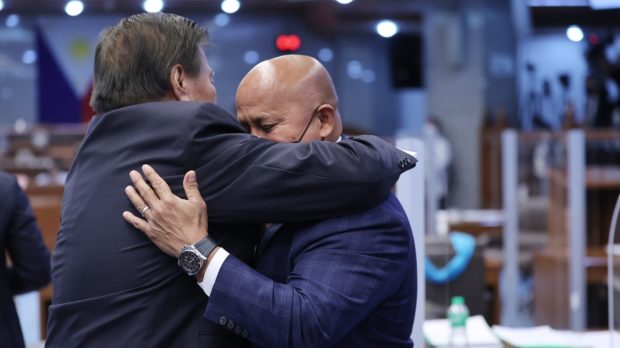 MANILA, Philippines — Emotions ran high and hugs between colleagues were given tightly to one another as the Senate capped off its last session of the 18th Congress, with eight senators ending their terms and bidding goodbye.

First to give his speech was Senate President Vicente Sotto III, who described his years in the Senate as the “highlights” of his over 30-year career in public service.

“On the matter of leaving, we Filipinos turn sentimental. Rizal wrote a long poem as he contemplated his execution. Our OFWs (overseas Filipino workers) have tear jerking scenes that rival movies in heart-rending last-minute tears and hugs,” Sotto said.

“We here are less prone to these expressions, but the sweet-sorrow of parting is real. We have come to love the Senate, its members, the secretariat, and the plain serenity of being at its premises. It will always have a special place in my heart,” he added.

As he ended his speech, Sotto could not help but turn emotional.

“When the time comes that my humble name will have to be ensconced and chiseled into the annals of the Senate’s history, I want to be remembered best as Vicente C. Sotto III, a musician by profession, a sportsman by affiliation, a drug-buster by vocation, and a public servant by conviction,” the Senate president said.

Next up was Senate Pro Tempore Ralph Recto who, in his farewell speech, paid tribute to his colleagues – honoring their work in the upper chamber and poking fun at some of them.

“Every hour spent here was a teachable moment to me. Every day is a blessing because it brought forth the chance to make a difference,” Recto said, before making his “last roll call” of the Senate members.

Recto brought up “the country’s oldest and first responder” – Senator Richard Gordon, who is the chairman of the Philippine Red Cross.

“The most iconic photo of Dick in action, when his trademark courage and compassion were on full display, was during the Pinatubo eruption. Here was a man running towards the most powerful volcanic eruption in history when people were running away from it. His CV of helping spans from Yoling to Yolanda,” Recto said of Gordon.

“At ungodly hours, you would find him on the estribo of a fire truck. Natutulog yata siya with a fire alarm by his bedside. We have to ask lovely Kate,” he said in jest, referring to Gordon’s wife.

“Frank closing his eyes in deep thought has inspired a catalog of memes which would have made him a billionaire if he could monetize it,” Recto said.

“Not that he had dozed off in the Senate, but this I will state with certainty: a sleeping Drilon will have more activity in his brain than many of us awake. He can even be pumped full of sedatives but will still retain computing power to outsmart the fully conscious among us,” he continued.

For his part, Senator Panfilo Lacson wished the remaining senators and Senate staff and employees good luck as he bid farewell to the upper chamber.

“I have gone full circle in this lifetime. I have experienced the best and the worst of life. My parents have always reminded us to count our blessings, no matter how little and insignificant, and never forget to thank God for each and every single one of them,” Lacson said.

“Yes, I am finally going home and allow the evolution of our country’s long line of legislators to take its course,” he said.

Drilon ‘yields the floor’ for the last time

Meanwhile, Drilon, who is set to retire from politics, credited the Senate for having given him a “wealth of knowledge, experience, and wisdom” he said he could not have gained elsewhere.

“Much of what and who I am now I owe to the Senate,” he said.

“Early in my first term, I learned that getting elected to the Senate did not make me a Senator. I had to labor hard to become worthy of the title. I had to earn my place in this house of 24 republics through hard work, late nights, and early mornings,” he added.

In his career in the Senate, Drilon was elected as Senate president four times. He also previously held the posts of Senate President Pro Tempore, Majority Leader, and Minority Leader.

“And it is here in the Senate where I have done my best and, perhaps, experienced my worst,” he also said.

Colleagues gathered around Drilon for hugs, the tightest among them seemed to be from an emotional Senator Ronald “Bato” dela Rosa.

In a speech later in the session, Dela Rosa thanked Drilo for guiding him during his years as a neophyte lawmaker.

“I have had the honor of having the best colleagues who have guided me along the way,” Dela Rosa also said, referring to other veteran senators, who are “graduating” from the Senate.

Before Wednesday’s session ended, the Senate adopted separate resolutions commending the service of the outgoing senators during their time in the upper chamber.