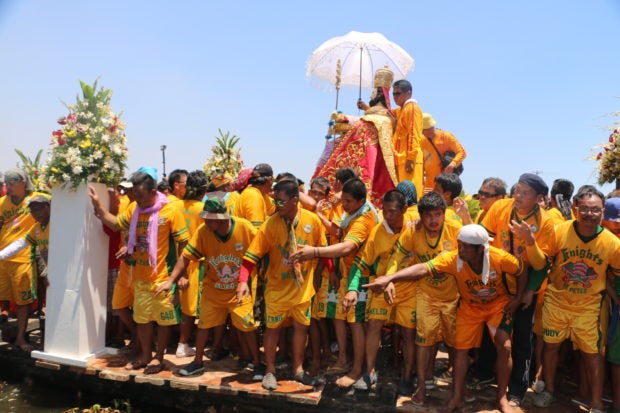 FAITH AND TRADITION The fluvial parade for St. Peter—Apung Iru to devotees—in Apalit, Pampanga, as shown in this prepandemic photo, will resume its 177th year commemoration on June 28 after two years of cancellation due to the COVID-19 pandemic. —TONETTE OREJAS.

APALIT—Local officials have allowed the fluvial procession for the revered image of St. Peter—Apong Iru to devotees—to resume on its 177th year after two years of suspending the religious tradition due to the COVID-19 pandemic.

Mayor Oscar Tetangco Jr. said the libad or parade in the Apalit stretch of the Pampanga River would be held on June 28 while Pampanga remains under alert level 1, or the least restrictive in a five-tier alert status.

The host village, Capalangan, was locked down during the three-day feast for the last two years, with policemen putting checkpoints on all entryways going to the village, including from the town of Calumpit in Bulacan province, to ensure no one would violate the prohibition on holding the festivity.

Traditionally, the event would draw 200,000 devotees and begin with the members of the Knights of St. Peter fetching the image owned by the descendants of the first known owner, Pedro Armayan Espiritu, from the family’s chapel in Capalangan before noon.

Devotees on motorized boats would tail after the image loaded on a pagoda. Those on the banks would dip themselves into the river or wave leaves from there.

For the celebration on June 29, a motorcade would replace the procession by foot from and to St. Peter and St. John Cathedral, Tetangco said.

The image would be returned to the private owner on June 30, he added.According to Tetangco, police personnel and village watchmen will be deployed to venues to enforce the wearing of face masks and physical distancing.

He said the libad had previously been canceled at least three times—when a 40-day flood submerged Central Luzon in 1972; during World War II; and Mt. Pinatubo’s June 15, 1991, eruption.

The image was first paraded in 1844 after Pedro Armayan Espiritu, a local elite, donated 45 hectares of farmland for the upkeep of the statue.

Isabel Arnedo, grandchild of Espiritu by daughter Maria and her husband, Gov. Macario Arnedo, sustained the devotion, using the proceeds from the farmland for the feast of the saint and for charities.

A grandaunt, Rosario Arnedo, became the next caretaker after the death of Maria in 1970. Rosario’s daughter, Eliza Sazon, assumed responsibility as kamarera (caretaker) until she died in 1987. Sazon’s daughter, Dr. Erlinda Badenhop, served as caretaker until 2008, transferring the task to Toto Gonzalez that same year, with the help of Badenhop’s daughter, Mylene Ramiro.

Villagers have also been sharing in the expenses for the upkeep of the image, including robes, which are over 100 pieces now. The statue’s face is made of ivory, and the staff, ring and crown are coated in gold. Tonette Orejas, INQ