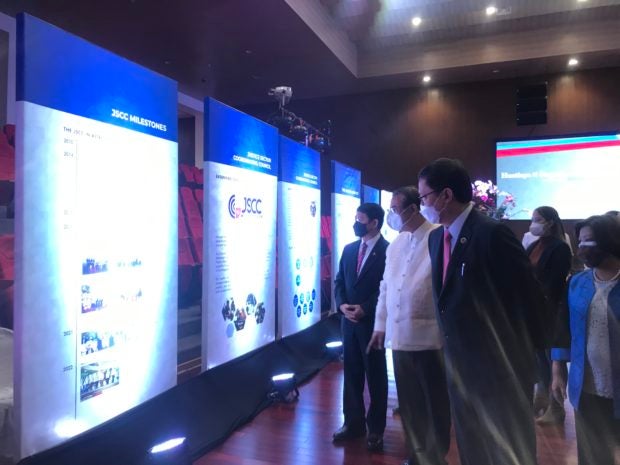 THE ELECTRONIC WAY Supreme Court Chief Justice Alexander Gesmundo leads the launching on Friday of Baguio City as the country’s ninth justice zone and the pilot site for the electronic court system that uses automated processes in issuing subpoenas and warrants. —VINCENT CABREZA

BAGUIO CITY—Chief Justice Alexander Gesmundo has designated the summer capital as the country’s ninth justice zone, and has prioritized the city as the judiciary’s first full-blown electronic court (e-court) site as the high court aims for automation.

The justice zones are where the Supreme Court and the rest of the judiciary, law enforcers, public defenders and prosecutors collaborate to solve problems that hamper the quick delivery of justice, Gesmundo said during the Baguio zone’s official launch on Friday at the Baguio Convention Center.Baguio joins the cities of Cebu, Quezon, Davao, Angeles, Bacolod, Naga, Calamba and Balanga as justice zones.

These justice zones are overseen by the Justice Sector Coordinating Council, which is comprised of the Department of Justice, the Department of the Interior and Local Governments, and the Supreme Court, according to the country’s top magistrate.“Once the e-court 2.0 software is ready, it will be deployed to Baguio City and all its trial courts,” Gesmundo said.

Gesmundo said Baguio and the rest of the zones would also establish an enhanced national justice information system for “data reconciliation and sharing.”

“Data reliability” is a fundamental issue for the criminal justice system, and this setup of data banking and a systematic information-sharing platform would ensure that judges, prosecutors, any agency dealing with offenders, and those accused of crimes would have access to accurate and relevant data, he said. Data sharing would still be restricted by basic laws protecting privacy.

For the moment, he said, local courts are unable to “penalize recidivists and habitual delinquents because of a lack of available trustworthy data.”

Automation and real-time data also mean court issuance and warrants would be circulated quickly through the justice zones to alert all law enforcement services and border agents about criminal suspects who are also fugitives, he said. The handling of drug cases and juvenile crime will be better managed by shared data, Gesmundo added.

The Supreme Court will also merge the judiciary’s databases for administrative and adjudication oversight, he said.Reelected Mayor Benjamin Magalong is currently in the process of converting Baguio into a smart city, which should augment the Supreme Court’s developing information technology infrastructure to make the judiciary “[serve] out justice in real time,” Gesmundo said.

He added: “In the Baguio City justice zone, the e-courts will continue to utilize and enhance the present e-subpoenas and e-warrants.”

As the high court automates its adjudicative and administrative processes, “we predict streamlined processes and seamless procedures—paving the way for faster and easier case resolution and disposition,” he said.

Baguio had been a trailblazer during the COVID-19 pandemic, Gesmundo noted.

Judges here allowed litigants to file petitions and other court documents online when the courts were locked down.

Depositions of inmates who could not be brought to the justice hall at the height of the quarantines were allowed through online video, said Jail Senior Insp. Vilma Fangsilat, warden of the local jail dormitory for women.

Baguio is where the Supreme Court has been holding its sessions during the summer for nearly a century, and the justice zone was conceptualized here eight years ago, Gesmundo pointed out.

“Someone suggested the idea of creating a zone … in the summer of 2014 here in Baguio City,” Gesmundo said, adding that it would be a new approach to recurring problems like court delays and “blame passing among agencies.”

He said the justice zones “ensure accountability and guarantee mutual assistance and understanding” among institutions tasked with delivering justice.

Incoming Solicitor General Menardo Guevara, the outgoing justice secretary, said all agencies tasked with dispensing justice were designed to protect their independence to ensure that due process prevails in court.

“But that has not been a convincing argument against us working together,” Guevara said, adding that “interdependence among agencies does not in any way cloud our institutional integrity and independence.”